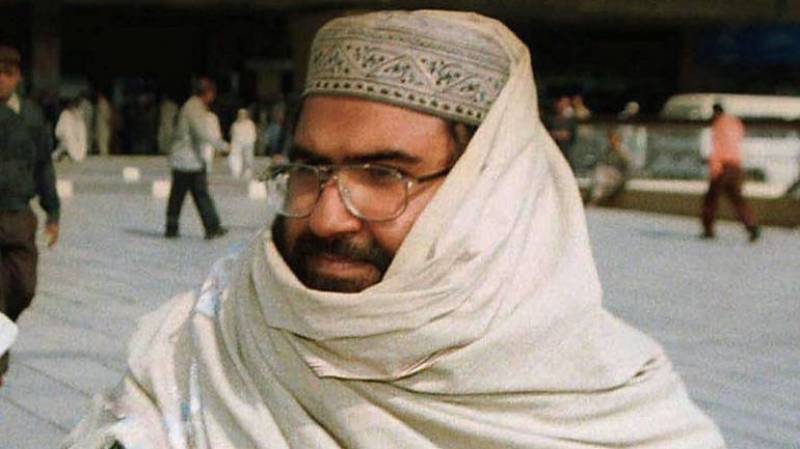 NEW DELHI - Although India is portraying Masood Azhar's terror tag as a one-sided diplomatic victory, it lost its resistance to China's multi-billion Dollars Belt and Road Initiative in the bid, it has emerged.

Days ago when Azhar was added to UN terror list, New Delhi claimed victory, however, reports are rife that India kept mum over the recent BRI summit to gain China's support on the matter.

Leading Indian daily, Hindustan Times reported on Friday that the decision to list Jaish-e-Mohammad (JeM) chief Masood Azhar as a global terrorist was sealed about 10 days ago, just before the Belt and Road Forum in Beijing.

The negotiations that ultimately took shape a few days ago took place in New York, while Washington, Delhi, Beijing, Paris, London and Islamabad were in the loop as per officials from at least six countries involved in the discussions.

“It was a multilateral game played at a subterranean level,” a top source said, explaining the complex web of bargains involved.

The negotiations for the listing of Azhar started in March when Chinese interlocutor Kong Xuanyou visited Pakistan, and Islamabad put five pre-conditions before Beijing could uplift the technical hold; the negotiations took place when the March 13 deadline for raising objections to the listing under the UNSC Resolution 1267 sanctions committee was looming large.

At that time, New Delhi had circulated its dossier on Azhar with all UN members, to make its case — that he was accused in multiple terror attacks in India, from the Parliament attack in 2001 to the Pulwama terror strike in 2019.

When Beijing remained the lone country to put a technical hold on the listing, India kept mum apparently becausee the back-door talks were underway and China had signed off on UNSC condemnation statement on the Pulwama attack.

Pakistan’s five pre-conditions to Delhi were conveyed by China as: de-escalate the situation; start bilateral dialogue; don’t link the Pulwama attack to Azhar’s listing; don’t push, along with the US, for more listings of other individuals and groups in Pakistan; and, stop violence in Kashmir

While Pakistan’s pre-conditions were not acceptable to India, Beijing added one more and that was to support its Belt and Road Initiative.

New Delhi had vehemently opposed the Belt and Road Forum in May 2017, and has maintained that the China-Pakistan Economic Corridor (CPEC), a part of BRI, violates India’s territorial sovereignty and integrity as it crosses through Kashmir lying in Pakistan.

India subsequently traded its silence on this year's BRI with Masood Azhar's listing as Beijing was already used to “transactional” nature of diplomacy, and had signed off on the “grey listing” of Pakistan by the Financial Action Task Force (FATF) as it wanted the vice-chair of FATF.

UNITED NATIONS - The chief of Jaish-i-Mohammed, Masood Azhar was apparently exonerated of allegations regarding the ...

At the end of March, the US, UK and France decided to push the resolution for Azhar’s listing at the UNSC instead of the 1267 sanctions committee, however, China did not like the idea as it would have to make a public statement on why it was defending Azhar’s listing.

As April dawned, India and Pakistan had also managed to de-escalate the situation after and so the first pre-condition was fulfilled.

By mid-April, the conversation around the BRI gathered steam, with the US asking China to be ready to lift its hold by April 23 if it did not wish the matter to be taken up at the UNSC.

This was the time when India agreed that it would not issue any statement on the BRI, unlike in May 2017, but made it known that it was not changing its position.

Pakistan had okayed the move regarding Azhar's listing to China when the Belt and Road Forum was approaching on April 25; Beijing and Islamabad also calculated that the listing will place Pakistan at an advantage when the FATF assesses its future of grey-listing.

The Iran-India equation was also reviewed by Trump administration as on April 22, the US announced that it was not going to grant any waivers to India, along with other countries, for importing oil from Iran.

With Azhar’s listing at stake, Delhi, which has always resisted unilateral sanctions in the past, decided to play along.

Meanwhile, the US wanted China to give a written understanding that it will not object to Azhar’s listing and failure to do so would result in open discussion and voting proposal at the UNSC by April 23; the date, which was earlier being negotiated for May 15, was then agreed for May 1. Beijing agreed to the date and the proposal to list at that time.

Interestingly, by the time India's Foreign Secretary Vijay Gokhale went to Beijing on April 22, the deal was sealed and the listing was set to take place at 9 am New York time (6.30 pm IST) on May 1.

As India portrays Azhar's listing as a setback for Islamabad and Beijing, facts put the whole episode in a different position as all the parties were on board and the listing did not link Azhar to the Pulwama attack in which over 40 Indian soldiers were left dead.