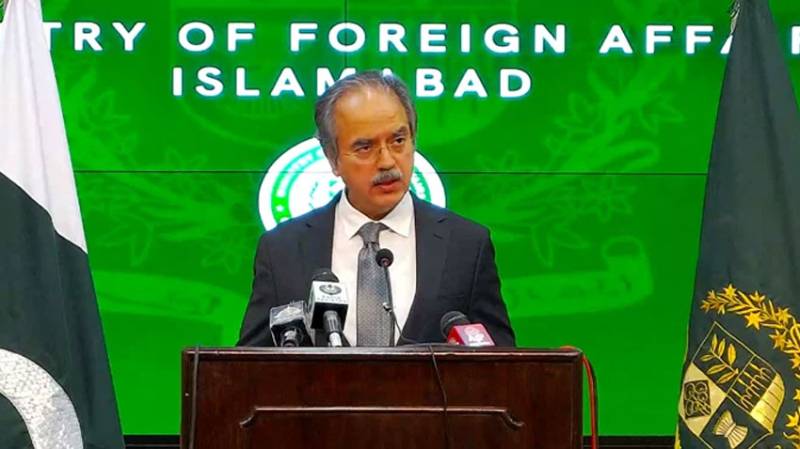 ISLAMABAD - India’s mischievous campaign to masquerade as a ‘victim’ of terrorism and seeking to hoodwink the world community by hypocritically leveling allegations against Pakistan is pathological,  said Foreign Office in a statement on Monday.

“His unfounded remarks are yet another manifestation of the Indian leaders’ obsession to concoct facts with respect to terrorism for misleading the international community, and to point fingers at neighbours in a bid to mask India’s own well-know credentials as a state-sponsor of terrorism and a serial violator of human rights,” Asim Iftikhar said.

Nowhere is state-terrorism more evident than in Indian Illegally Occupied Jammu & Kashmir (IIOJK), where over 900,000 Indian occupation forces continue to terrorize, torture and torment innocent Kashmiris with impunity. The world is also aware of the “saffron terror” orchestrated and unleashed by the BJP-RSS zealots against Muslims in India, he said.

Iftikhar highlighted that Pakistan’s contribution to world peace, from successful counter-terrorism operations to our role in the global fight against terrorism, is widely acknowledged by the international community.

“Pakistan is the only country that has stemmed the tide of terror directed against it from elements and states with inimical motives. In reality, India has been involved in supporting terrorism against Pakistan from its own territory and from other countries in the region.”

The spy Kulbhushan Yadhav, a serving Indian navy officer and RAW operative who was involved in planning, supporting, abetting and executing terrorist activities in Pakistan, remains a stark reminder of India’s true face of a state sponsor of terrorism.

Pakistan calls upon the international community to hold India accountable for its patronage of terrorist entities and for instigating unrest in neighboring countries.

More importantly, rather than leveling baseless allegations against Pakistan, India would be well advised to abjure its policy of state terrorism in IIOJK and against the Muslims in India, and allow the Kashmiri people to exercise their right to self-determination as enshrined in the relevant UN Security Council resolutions and as per their wishes.

NEW DELHI – The official Twitter handle of the Government of Pakistan has been withheld in India in another ...