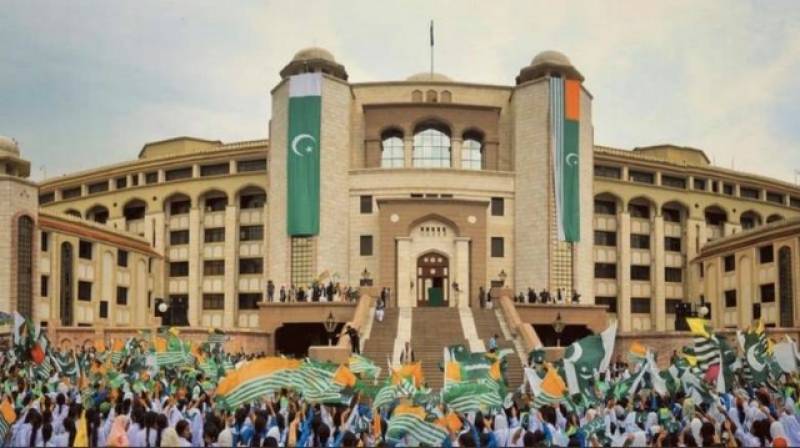 ISLAMABAD – The lower house of Pakistan's Parliament Tuesday passed a unanimous resolution to express solidarity with Kashmiris and called upon the Organization of Islamic Cooperation (OIC) to immediately convene a special summit to discuss the grave human rights violations by India in Occupied Jammu and Kashmir.

The 18-point resolution was presented by Chairman of Kashmir Committee Syed Fakhar Imam after a two days debate on the issue of Kashmir in the National Assembly.

The house emphasized that February 5 was the International Day of Solidarity being marked all over the world to express solidarity with the people of Kashmir who were living under a state of siege for more than seven decades under a fierce and cruel Indian occupation.

The house expressed unflinching, unwavering and unstinting commitment of the people of Pakistan with the people of Indian occupied Jammu and Kashmir (OIJ&K) and expressed solidarity with brothers and sisters of Kashmir in their historical struggle for their freedom and rights.

While honouring the courageous and valiant people of Indian Occupied Jammu and Kashmir, they paid tributes to all those men, women and children who laid down their lives fighting for their right of self determination over seven decades.

The legislators reaffirmed that Jammu and Kashmir remained the subject of an internationally recognized dispute that had been and continued to be on the agenda of the United Nations Security Council (UNSC) since 1948, and affirmed by the subsequent relevant UNSC resolutions.

They recognized that any political process held under the foreign occupation could not be a substitute to the exercise of the right to self determination by the people of Jammu and Kashmir as provided in the relevant UNSC resolutions.

They reaffirmed Pakistan’s consistent political, moral and diplomatic support to the Kashmiri people until the realization of their legitimate right to self determination as per the relevant UNSC resolutions.

The lawmakers condemned strongly the unilateral illegal action of the Indian government of August 5 and October 31, 2019 and the subsequent illegal detentions, arrest, lockdown, communications blockade, media black out in the IOJ&K which had brought immense sufferings to the people of Kashmir.

They expressed grave concern at the continued presence of more than 900,000 Indian military personnel thereby turning the entire Kashmir valley into a virtual open prison and making it one of the most militarized areas of the world.

They condemned the past and present Indian atrocities, including detention of over 13,000 Kashmiri youth at undisclosed locations, the use of pellet guns by the Indian military against innocent civilians, and torture and humiliation of the ordinary civilians.

The members expressed concern at the illegal detention and long incarceration of the political leaders from different political parties, particularly the Kashmiri Hurriyat leaders like Yasin Malik and Shabbir Shah who was first arrested when he was 14 years old and kept behind bars on and off.

He was presently more than 65 years of age and was still in jail. Syeda Asiya Andrabi was kept behind bars for 11 years collectively while Syed Ali Gilani and Mir Waiz Umar Farooq were put under house arrest. Dr. Qasim Faktu was behind bars for 27 long years at a stretch while Mussarat Alam was in jail for 19 years continuously and there were many more such political prisoners.

The house strongly condemned the horrifying violence against women especially the use of rape as a weapon of war by the Indian occupation forces.

The legislators deplored the impunity given to the Indian occupation forces by India’s draconian laws, and the continuing restrictions of freedom of movement, association and expression in the IOJ&K constituting gross violation of fundamental rights of the people of Kashmir.

They denounced India’s deliberate targeting of civilian population with the intensified ceasefire violations, which had led to the death of Kashmiris across the line of control, further threatening peace and security in the region.

They expressed concern also at Indian strong-arm tactics to alter the demography through ethnic cleansing in IOJ&K in violation of the international human rights law including the 4th Geneva Convention.

They rejected totally the BJP government’s belligerence and warmongering inspired by the exclusionary Hindutva ideology in utter disregard of human right laws and threatening to destroy peace and stability in the region, and reaffirmed the unshakeable resolve of the Pakistani nation to thwart any Indian aggression.

They welcomed the UNSC consultations of the 15th and 16th January 2020 that acknowledged the internationally recognized nature of the dispute, and the gravity of the situation post August 5 and its implications for the regional peace and security.

They noted the Report of the Office of High Commissioner for Human Rights (OHCHR) of June 2018 and July 2019 documenting extensively the grave and systematic violations of human rights in the IOJ&K and endorsed the call by the High Commissioner to the Human Rights Council to conduct a comprehensive independent international investigation into the alleged human rights violations in Kashmir.

They appreciated the role played by world leaders, statesmen and stateswomen, parliamentarians, human rights organizations, international media, and many countries, particularly China, Malaysia, Turkey and Iran in raising their voice against Indian atrocities in IOJ&K.

They called upon the UN Security Council to enforce a peaceful settlement of the Jammu and Kashmir dispute in accordance with the relevant UNSC resolutions.

They urged the government of India to implement forthwith numerous pending UNSC resolutions on Jammu and Kashmir that call for a free and impartial plebiscite conducted under the auspices of the United Nations to determine the will of the people for the final disposition (resolution) of the issue of State of Jammu and Kashmir.

The legislators urged the UNSC to compel India to allow Military Observer Group in India and Pakistan and call upon India to respect the UNMOGIP mandate accorded by the UNSC.

They demanded that India immediately allow access to the international human rights and humanitarian organizations and Parliamentarians of the countries affiliated with United Nations as well as the international media to the IOJ&K so that they were able to assess and report the human rights situation there.

The house called upon OIC to immediately convene its special summit on Kashmir.

While taking part in the debate on Kashmir, the parliamentarians vociferously criticized India for its unrelenting violations of basic rights of Kashmiris.

They were of the view that parliamentary delegations should be sent abroad to convince the world to help resolve the Kashmir issue.

Member National Assembly Ali Gohar said the Indian government showed its real face and annexed Kashmir and declared it as its territory.

He said the nation was united for the integrity of Pakistan. The opposition including Pakistan Muslim League(N) and Pakistan Peoples Party had set aside their political differences to stand for the cause of Kashmir.

Kashmir was the integral part of Pakistan and would continue to remain so, he added.

Novel coronavirus was a serious threat and the house should hold extensive discussion on the risks posed by the virus, he added.

He said Pakistan had fought three wars on Kashmir and was ready to respond to the aggression of India, adding Pakistan wanted peace in the region but this desire should not be considered a weakness.

India and Pakistan were nuclear powers and any war would destroy both of them, he added.

The minister said Pakistan never elected extremist parties like Bharatiya Janata Party which was even suppressing its own people.

Dissent was crushed in India, he said adding the violations of rights of people in India was condemnable.

He said for the last two hundred days, there was communication blockade and people were besieged in Kashmir.

He lauded the leaders of Kashmir including Mir Waiz Umar Farooq, Ali Gilani and Asiya Andrabi for their long struggle against the Indian hegemony and oppression.

Despite all the political differences, the parties were steadfast for the freedom of Kashmir, he added.

Abdul Qadir Patel said Kashmir was the issue which was left unresolved at the time of partition of Indian sub continent.

He said India turned Kashmir into a jail, its planes violated airspace of Pakistan and usurped freedom of Kashmir and put the whole population of Kashmir valley under curfew.

He criticized the decision to increase influence of International Monetary Fund (IMF) in the Pakistani economy.

Patel said war was not a solution to any problem, adding the founder of Pakistan Peoples Party Zulfikar Ali Bhutto had said that the Pakistani nation was ready to fight for Kashmir for the next 100 years.

He complained of lack of support from Muslim countries on the issue of Kashmir.

It was important that the Parliament should have unanimity of views on the Kashmir issue, he added.

In the past, the parliament had developed consensus when Pakistan fought its war against terrorism and carried out military operations in Swat and other areas, he added.

He said the UN also passed resolutions on East Timor and South Sudan and both became separate states after some years.

He condemned the world powers for their double standards and for not implementing the resolutions on Kashmir.

Muslims were being exploited all across the world including in countries like Afghanistan, Iraq, Syria and Palestine, he added.

He said India was carrying out massive human rights violations in the Occupied Kashmir.

The minister said sit in of opposition in October last year put Kashmir in the back ground.

Naz Baloch said India had entered hundreds of thousands of troops in Kashmir and took away the rights of Kashmiris and tortured elderly and youth and raped women and girls.

Kashmiris should be given their right to self determination and the world should make efforts for resolving the Kashmir issue, she added.

He endorsed the view that delegations of parliamentarians should be sent abroad for cause of Kashmiris.

Leader of Jamiat Ulema Islam (JUI) Asad Mehmood said the United Nations resolutions on Kashmir provided the basis to Pakistan to advocate its case on Kashmir.

Pakistan had been extending moral, political and diplomatic support to Kashmiris, he added.

He observed the efforts made by the government were not enough to make progress on the Kashmir issue.

The MNA said Muslims of sub continent waged a hundred year struggle against the British and the same would be done by Pakistanis and Kashmiris on the issue of Kashmir.

He censured the world powers for their criminal silence on the oppression of India against the Kashmiris.

Asad said people in Azad Kashmir, Occupied Kashmir and Pakistan had held their ground on the Kashmir issue and did not retreat from their stance.

He called upon the government to reactivate their diplomatic efforts.

Khurram Dastgir said for Pakistan, Kashmir was not just territorial dispute and it was striving for securing right of self determination of Kashmiris.

He said when India ended the special status of Kashmir and annexed the territory it was setback for the foreign policy of Pakistan.

Indian troops killed one hundred thousand Kashmiris and raped women, he said and advised that these atrocities should be exposed before the international community.

He said Pakistan needed to retool its foreign policy by taking advantage of its strength including its nuclear deterrence.

Minister of State for Climate Change Zartaj Gul said Kashmiris felt honoured to bury their martyrs in the flag of Pakistan.