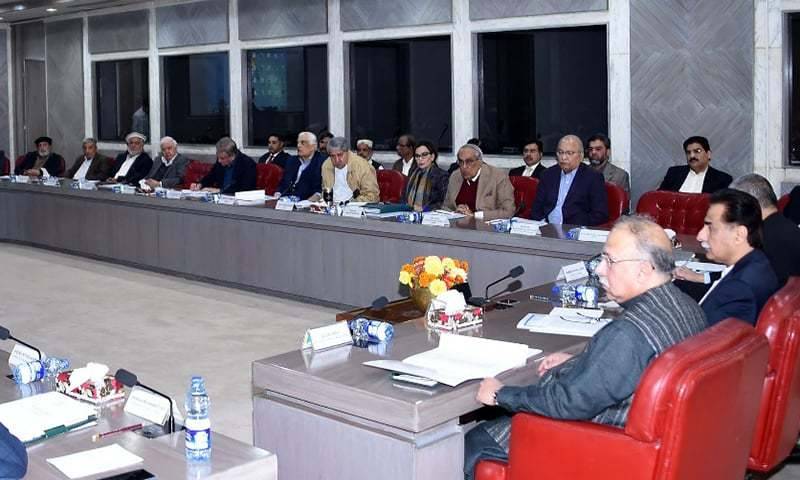 ISLAMABAD - The Parliamentary Committee on National Security on Thursday reached a decision to invited military leadership and other defence department in next meeting of the committee to give briefing amid US allegations.

NA Speaker Ayaz Sadiq headed first round of the moot, which was called on Tuesday after US President Donald Trump accused Pakistan of being "liar".

Trump tweeted as, "The United States has foolishly given Pakistan more than 33 billion dollars in aid over the last 15 years, and they have given us nothing but lies & deceit, thinking of our leaders as fools," Trump said in the early-morning New Year's day tweet. "They give safe haven to the terrorists we hunt in Afghanistan, with little help. No more!".

The meeting, which aims to o take all parliamentary leaders into confidence over response to US threats, was attended by number of parliamentary leaders, including Opposition leader of NA Syed Khursheed Shah, Naveed Qamar Haider, Ghulam Ahmad Bilour, Aftab Sherpao, Sahibzada Tariqullah, national security adviser Nasir Janjau and others.

At the start of the session, Ayaz Sadiq said that all matters related to national security will be discussed in the meeting. He called for unity regarding the national security as it is the matter of country's survival.

During the meeting, the opposition said that another session of the committee should be called in order to take more clear view of the situation.

In next session, officials from finance ministry and armed forces to be invited for giving briefing on the issues.

Opposition leader Khursheed Ahmad Shah said Pakistan should not make decision on emotion and in haste.

ISLAMABAD - Pakistan is ‘deeply disappointed’ at the allegations levelled against Pakistan by the US president, the ...

On Wednesday, the federal cabinet, in its meeting with Prime Minister Shahid Khaqan Abbasi in the chair, unanimously endorsed the stance of National Security Committee (NSC) which had expressed deep disappointment over recent statements of the US administration.

In the meeting which was called to discuss the strategy and future policy of Pakistan after Donald Trump’s ‘incomprehensible’ tweet, the committee viewed that the American statements were detrimental to the bilateral relationship between Pakistan and the United States, a relationship that had been developed over generations, PM Office media wing said in a press release.

Meanwhile, President Mamnoon Hussain has summoned the session of the National Assembly on January 12, 2018 in order to take the political leaders into confidence for a Pakistani response to the US accusations.

Parliamentary leaders of political parties are on same page against the US remarks. PTI chief Imran Khan, PPP leader Syed Khursheed Ali Shah and others have censured the allegations leveled by the US.