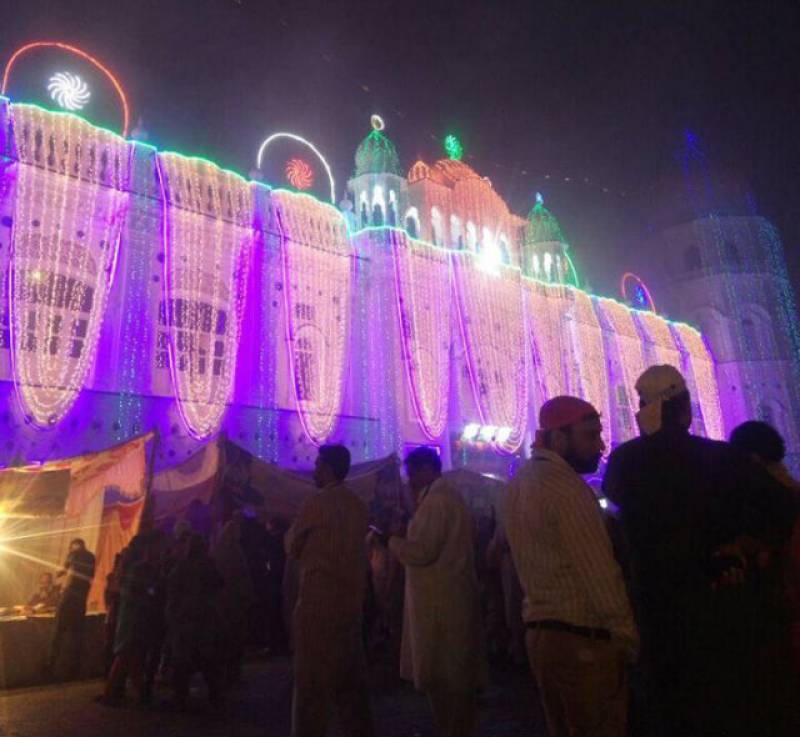 According to Sikh rituals all pilgrims wash their feet before entering the Janam Asthan.

Over 2,600 Sikh pilgrims from India arrived in the country Thursday to attend the birth anniversary celebrations of Baba Guru Nanak, the founder of Sikhism. Evacuee Trust Property Board (ETPB) Chairman Siddiqul Farooq welcomed the Sikh pilgrims at Wagah Railway Station.

Soon after their arrival, the pilgrims left for Janum Asthan of Baba Guru Nanak at Nankana Sahib.

The pilgrims praised Pakistan's arrangements for Yatrees stating 'they have won our hearts’.

Kamal Jeet Kaur, who is settled in England, said: “We have felt so much love here. We have come for the first time and have found Pakistan a peaceful country.”

The women, originally from Phagwara, Jalandhar city of Indian Punjab, shared that people in Pakistan have more respect and love for the Sikhism founder than in India.

Bahdaur Singh Dhillon, from UK, appreciate the arrangements on the event. He, however, urged the authorities to ease the visa acquiring process.

A Sikh pilgrim talks to Daily Pakistan during her visit to Nanaka Sahib on 549th birth anniversary of Baba Guru Nanak. pic.twitter.com/KlO2Qfl1mE

At Nankana Sahib - the most sacred place for Sikhs - 'Khalistan Referendum 2020' banners could be seen on all walls of Janam Asthan along with pictures of Bhindranwala Singh, who was killed during 1984 Operation Blue Star carried out at Golden Temple in Amritsar by the Indian army.

Besides free medical camps, a number of stalls selling bangles, ready-to-wear- clothes, ice cream and souvenirs have been set up at the place.

Addressing the main ceremony at Guru Nanak Janam Asthan, Evacuee Trust Property Board Chairman Siddiqul Farooq said that founder of Sikh religion gave message of peace. He assured Sikhs from all over the world that the government will cooperate in establishment of Guru Nanak University in the city, adding that a committee has been formed under Barjees Tahir as its chairman.

The ETPB chief further said that more residential rooms will be built in gurdwaras. “We have established online charity system and now anyone who wants to donate money for building new residential buildings can do so and the process is transparent,” he added.

Sikhs living in Pakistan had a long had a demand for the construction of a university after the name of their first religious head in the Punjab district.

MPA Ramesh Singh Arora appealed Sikh pilgrims coming from all over the world to convey true sentiments about Pakistan. He said minorities in Pakistan have complete freedom to practice their religion.

Like every year, pilgrims performing their sacred rituals will leave for Punja Sahib, Hassanabdal on Sunday.

The celebrations last for more than a week during which sacred rituals are performed at the Gurdwara and sweets and langars are offered, irrespective of religious orientation.

They will return to Lahore on November 9. The pilgrims will leave for their respective countries on November 11.