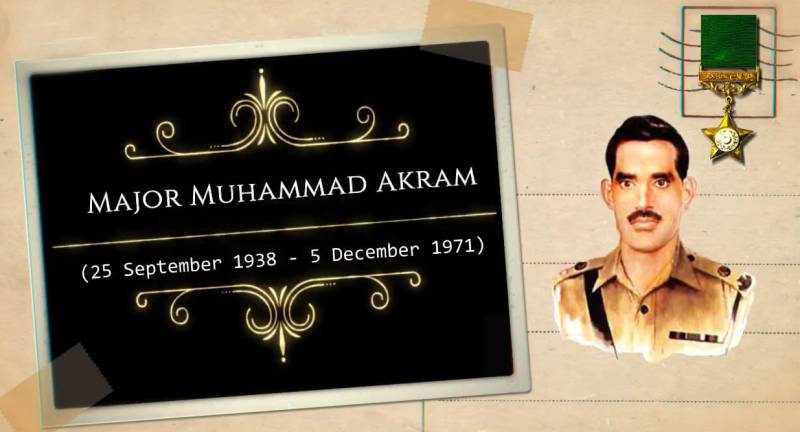 RAWALPINDI – The Pakistan Army has paid tribute to Major Muhammad Akram on his 49th martyrdom anniversary.

Pakistan Army spokesperson, Major General Babar Iftikhar has paid rich tribute to Major Akram Shaheed, Nishan-e-Haider for his supreme sacrifice, saying that “Displaying valour against all odds, he heroically repulsed innumerable attacks by enemy inflicting heavy losses in battle of Hilli. Such exemplary courage is hallmark of defenders of motherland”.

Tribute to Maj #Akram Shaheed, #NH, 4 his supreme sacrifice. Displaying valour against all odds, he heroically repulsed innumerable attacks by enemy inflicting heavy losses in battle of #Hilli. Such exemplary courage is hallmark of defenders of motherland.#OurMartyrsOurHeroes

He was born on April 4, 1938, in Dingha, a small village near Kharian Cantonment in Punjab. In 1963 he was commissioned in the Frontier Force Regiment.

He participated in 1965 Indo-Pak War as a Captain where he led several successful military operations against the Indian Army.

Major Akram and a company of 4 Frontier Force Regiment, which he commanded in the forward area in Hilli district, in East Pakistan in 1971, came under incessant air, artillery and armour attacks.

But for an entire fortnight, despite enemy superiority in both numbers and firepower, he and his men repulsed every attack, inflicting heavy casualties on the enemy. The objective was to cut an important rail link and deprive Pakistani troops in the northern region of reinforcement and supplies

He not only displayed the ability to command his troops but also displayed an unmatched aptitude for tactical planning under fire and in the face of overwhelming odds.

Major Akram embraced martyrdom during this epic battle on December 5, 1971, and was posthumously awarded the highest military award Nishan-e-Haider for his valiant and courageous acts against the enemy.