Indian police to use another lethal weapon in held-Kashmir 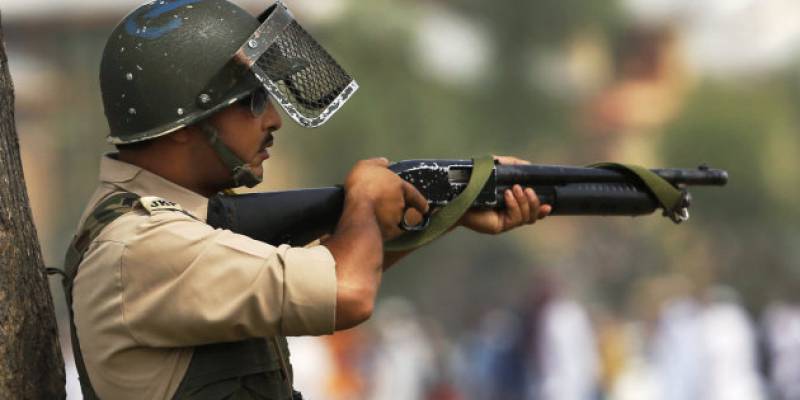 SRINAGAR – After failing to suppress the Kashmiris’ ongoing freedom movement with bullets, pellets and teargas and PAVA shells, Indian police will now use plastic bullets for crowd dispersal in occupied Jammu and Kashmir.

Dozens of people have been killed while thousands injured due to the use of pellets by the Indian forces’ personnel since the extrajudicial killing of popular youth leader, Burhan Wani, on July 8, 2016. Hundreds of these wounded have been rendered blinded, Kashmir Media Service reported.

As per India’s Defence Research and Development Organisation (DRDO), which developed the plastic bullet, the plastic bullet can be fired from the AK-47 rifles and has been supplied to the police in occupied Kashmir..

Manjit Singh, Director, Terminal Ballistics Research Laboratory, one of the major laboratories of the DRDO, in Chandigarh, said the plastic bullet is an effective way to control crowds and one lakh bullets have already been supplied to the police in Kashmir.

PULWAMA — Indian troops in a fresh act of state terrorism martyred four youth and injured several others in Tral area ...

Meanwhile, two Kashmiri youth were injured after Indian troops used brute force against the mourners heading home after burying a woman in Sherabad area of Tral in Pulwama district on Saturday.

The mourners were returning home after the burial of a lady who had passed away earlier today when the troops fired teargas shells and pellets at them resulting in pellet injuries to two mourners, KMS reported.

The injured mourners identified as Amir Gulzar Ganai and Khursheed Ahmed were shifted to nearby hospital for treatment.

Also on Saturday, Indian troops blasted a residential house with explosive material during a cordon and search operation in Aripal area of Tral.