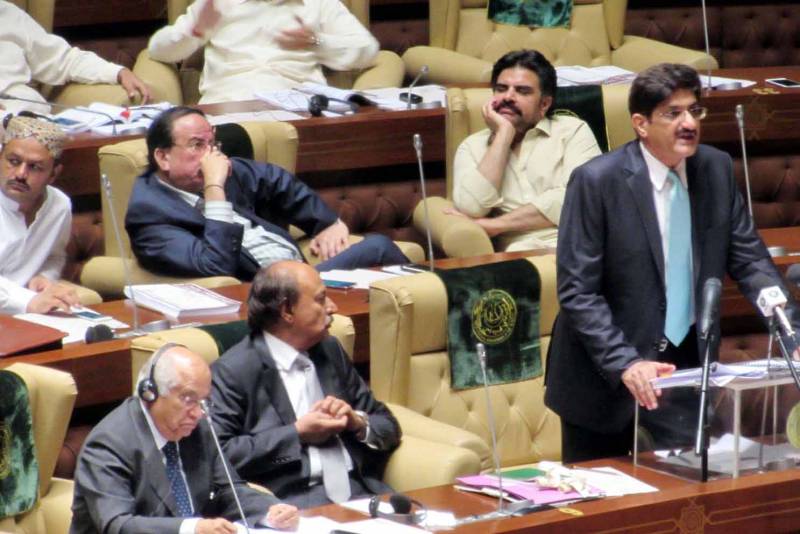 KARACHI - The government of Sindh will present the budget for the upcoming year 2017-18 in the provincial Assembly on Monday (today).

Chief Minister Murad Ali Shah who also holds the portfolio of minister for finance would make the budget speech at around 3 P.M after  Sindh cabinet  approve budgetary estimates for the upcoming financial year and revised budget for the outgoing fiscal year 2016-17.

According to media reports,  Sindh government would face a shortfall ranging between Rs12 billion to Rs16 billion in meeting its overall expenses in the upcoming financial year.

The provincial budgetary estimates for non-development expenses are expected to be Rs 665 billion, while the overall development budget will be around Rs346 billion, Geo News reported.

The provincial government is likely to announce around 46,000 government job vacancies. This would include 14,000 vacancies to regularise the services of lady health workers and 10,000 new jobs in the police force.

The ongoing Karachi development package in the next financial year is likely to contain 14 new projects.

This is the tenth consecutive budget by the ruling Pakistan Peoples Party and most probably the last one before the next general elections scheduled to take place in 2018.

The government of Punjab had presented its budget on Friday with a total overlay of Rs1.977 trillion.

The provincial minister said that the budget for the next fiscal year has the largest development programme amounting to Rs635 billion. She added that it was unprecedented in the country’s history among all provinces.

“The development budget is 15 percent more than the current fiscal year,” Dr Ayesha said in her budget speech.

Earlier, the provincial cabinet approved the budget in a meeting presided over by CM Shahbaz Sharif.

A 10 per cent raise has been made in the salaries and pension of provincial government employees.