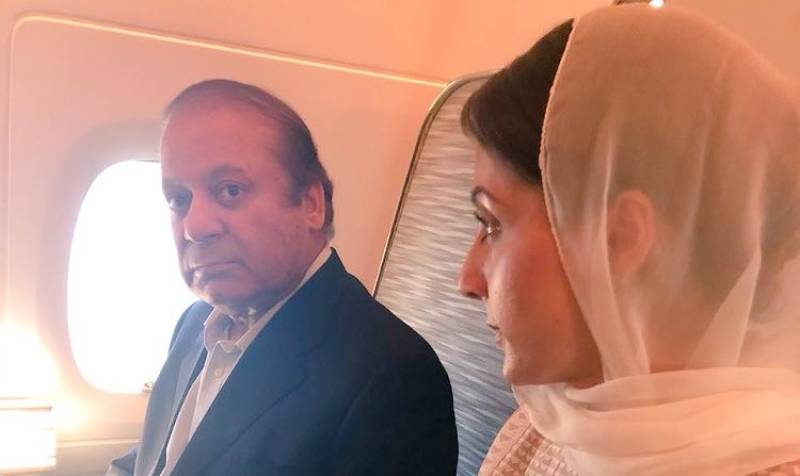 LAHORE - Maryam Nawaz advocated the release of the former prime minister Nawaz Sharif from jail in point-blank remarks on Tuesday, revealing that the politician was not in good health.

In a series of tweets, Maryam explained the medical condition of the former premier describing it as 'life-threatening' while complaining that the government was not paying heed to the situation.

"MNS’s doctor & I met him at Kotlakhpat jail today. During the meeting he had an episode of angina & asked for his nitrate spray. It was then that he divulged that he has had similar attacks 4 times in last week. He reiterated that he will neither report nor complain," Maryam Tweeted.

In another tweet, Maryam claimed that the government had not offered any treatment to the supreme leader of Pakistan Muslim League Nawaz even during his stay at the hospital a few days ago.

There is no treatment offered to him even when he is taken to & kept in the hospital for days. He says he doesn’t want to be in the hospital as an excuse or escape or just for the sake of it. https://t.co/FSyZnfvGmX

The visibly concerned Maryam continued, 'My family & I are extremely concerned given the grave risk to his health. His condition is in every way life-threatening.

The daughter of the former lawmaker explained that every episode of angina worsens the heart disease and can irreversibly damage the heart as well.

It’s a medical fact that every episode of angina worsens the heart disease further & can irreversibly damage the heart. Who will I blame or who will be responsible if anything happens to him God forbid? The callousness, I repeat, is shocking.

Hours after elaborating the medical condition of the politician, Maryam changed her profile picture on the social media network with 'Free Nawaz Sharif' pasted on a picture of the former prime minister.

One of the social media users also requested Maryam to persuade Nawaz Sharif, visit the hospital, however, she replied that the former premier did not budge despite repeated attempts.

Sharif's plea for bail on medical grounds in the Al-Azizia Steel Mills reference conviction was turned down by the Islamabad High Court last month following which he has moved the supreme court.

He was moved back to the Kot Lakhpat jail from the Jinnah hospital a few days ago.