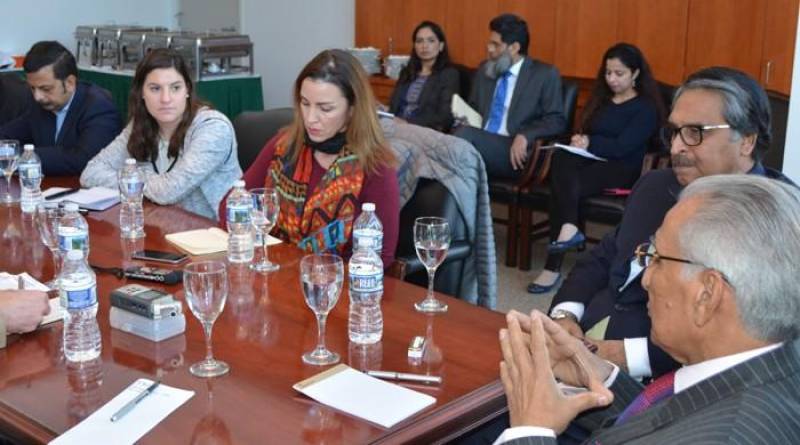 WASHINGTON - Special Assistant to the Prime Minister for Foreign Affairs Tariq Fatemi said that Pakistan is looking forward to working with the new US administration of President-elect Donald Trump.

In a meeting with media representatives at Pakistani embassy on Monday, he said that Pakistan want bilateral relations to be further strengthened in the future.

Mr Tariq Fatemi apprised the media that he is currently visiting US to have interaction with the current US Administration and to reach out to the officials likely to join the new Administration following the recent US Presidential election. Mr Fatemi underscored that Pakistan was looking forward to working closely with the new US Administration and wanted the bilateral relations to be further strengthened in future.

Once President-elect Donald Trump assumes his office, Pakistan would look forward to meaningful engagement with the USA to further improve bilateral relations with the US both in the context of regional and international issues.

Fatemi stressed that Pakistan could play a significant role in promoting peace and stability not only in Afghanistan but in the entire region. Pakistan has a confluence of interests with USA and there was a solid track record of US and Pakistan working together over 07 decades to promote regional peace and stability.

Highlighting Pakistan's unflinching commitment to putting an end to terrorism and militancy, Mr Fatemi narrated that Pakistan had lost approx. five thousand army personnel in counter-terrorism campaign. Pakistan had deputed more than 200,000 troops in its Northern Areas and along the Pak-Afghan border in this effort. Pakistan was also pursuing the National Action Plan and the whole nation was united in its resolve to rid the country of terrorism in all its manifestations.

Fatemi also underlined the need for a sustained dialogue process between Pakistan and India to resolve their long-standing differences including the issue of Kashmir. He briefed the journalists about the widespread and homegrown uprising in Indian Occupied Kashmir which the Indian Govt was trying to suppress by force and with massive human rights violations.

Over 16,000 Kashmiris have been injured and approx. 600 blinded by using special kind of guns known as Pellet Guns, aimed at damaging the eyesight of innocent Kashmiris. In addition, the number of ceasefire violations have increased during recent months. Moreover, these violations are targeted at innocent civilians which amounts to a war crime.

Fatemi emphasised that Pakistan had made remarkable progress over the last 03 years. Since the current Govt. assumed power in June 2013, a new chapter began in Pak-US relations. The Strategic dialogue between the two countries was resumed and it's agenda broadened. Pakistan was an important democratic country in South Asia and had a vital stake in the region and its stability and economic development.

Fatemi gave a detailed account of the progress Pakistan has made after Prime Minister Nawaz Sharif Govt assumed power. He said that all state institutions were working in sync with each other in the country. Pakistan had already made remarkable all round progress in economic front particularly in overcoming the energy crises.

Marked improvement in law and order situation in Karachi was clearly visible in the unprecedented performance of the Pakistan Stock Exchange which had been appreciated widely around the globe.

Pakistan would be forthcoming in cooperating with new Administration in the US, in achieving peace in Afghanistan and improving Pakistan-India relationship for the sake of peace in the region, Mr Fatemi concluded.