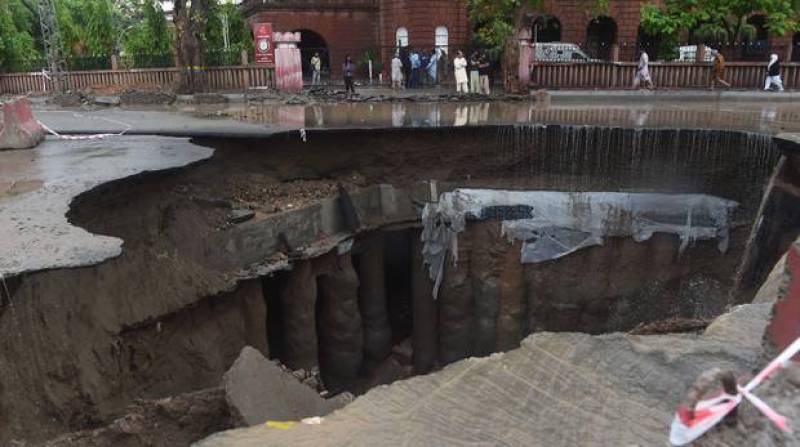 LAHORE - A committee set up by the caretaker Chief Minister Punjab Dr Hassan Askari has submitted its fact-finding report on the sinkhole developed at the Mall following the heavy downpour.

The report was submitted at a meeting presided over by Caretaker Punjab Transport Minister Mian Nauman Kabir at Civil Secretariat on Thursday.

In the report, a PTCL duct and non-construction of retaining wall were cited as the main reasons for developing of the sinkhole.

A 20ft deep and 200ft long ditch on the Mall Road in front of the General Post Office after the heaviest rains in 38 years turned roads into puddles in Punjab's capital city.

Addressing the meeting, Mian Nauman Kabir said that the committee only presented fact-finding report; those responsible for the incident should also be identified so that stern action could be taken against them under the law.

Chief Secretary Punjab Akbar Durrani ordered the committee to also find those who committed negligence and submit a report within three days.

He directed that the survey of 1.7 kilometer underground track of Orange Line Train be conducted as early as possible so that such unfortunate incident could be avoided in future.

He also issued necessary instructions to Director General of Lahore Development Authority (LDA) and other departments regarding implementation of the remedial measures proposed by the committee.