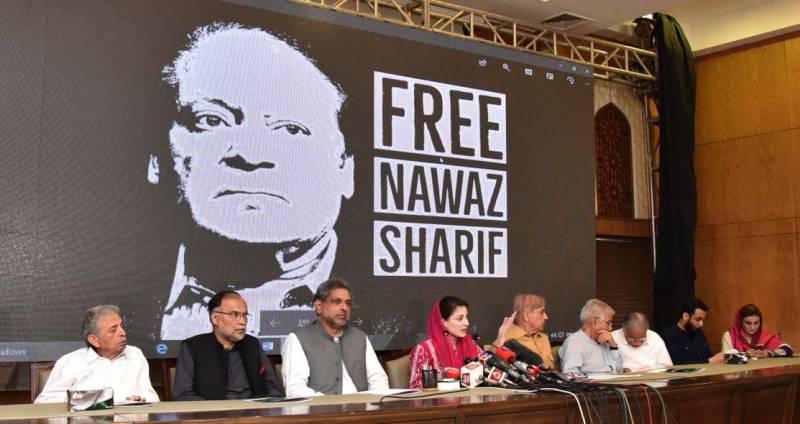 LAHORE - The top leadership of Pakistan Muslim League-Nawaz (PML-N) on Saturday released a secretly recorded video clip which they claim is a conversation between Nasir Butt, a man described as a loyal fan of Nawaz Sharif, and Accountability Judge Arshad Malik, who had in December last year sentenced the deposes prime minister to seven years in jail in the Al-Azizia Steel Mills corruption reference.

Flanked by her uncle Shehbaz Sharif and ex-premier Shahid Khaqan Abbasi at a press conference in Lahore, Maryam Nawaz played the video whereby the judge could be heard saying that there was there were “no proof of corruption against the deposed premier” in the Al-Azizia reference.

The PML-N leader said that the judge also said that he found “no evidence of any embezzlement of funds by Hussain Nawaz (her brother) in Pakistan or Saudi Arabia” and there is "no absolute link between Nawaz Sharif and the properties in London”.

The PML-N leader also claimed that her father and family presented all sorts of evidence in the court during the hearing of accountability cases against them but none was accepted and today “the reason is before everyone”.

Maryam alleged that the judge had contacted Nasir and told him that he was feeling "guilt" after announcing the verdict against Nawaz.

She claimed that the judge was blackmailed into issuing the verdict against her father and that her father became a victim of “political revenge”.

In December, an accountability court sentenced former prime minister Nawaz Sharif to seven-year rigorous imprisonment after it found him guilty in Al-Azizia reference, one of the three graft cases filed by the National Accountability Bureau (NAB) in line with the apex court order.

The former premier and his family members have already been convicted in Avenfield case. However, the accountability court judge Muhammad Arshad Malik on Monday acquitted Sharif in Flagship reference.