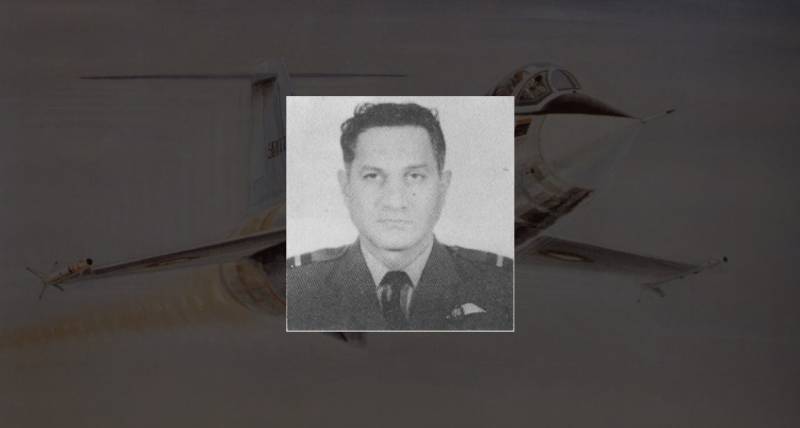 Air Commodore Mohammad Zafar Masud (HJ, SBt) was fondly known as Mitty Masud in the Pakistan Air Force (PAF). Born on October 17, 1927, he obtained his commission in the General Duty Pilot (GD [P]) Branch of the Royal Indian Air Force. Masud’s Commission Date was February 25, 1946 and Service No. was 3314 (according to Bharat Rakshak, an Indian news archive website). Masud was one of the pioneers of the PAF. September 7th was declared as Pakistan Air Force Day in large part due to the accomplishments of PAF Base Sargodha (now PAF Base Mushaf), where Masud was the Base Commander, during the 1965 war with India.

Masud was born into a prominent and highly educated family. He was the eldest son of Zafar Hussain Khan and Zakia Sultana (the daughter of Allama Mashriqi’s sister, Aisha Begum). Masud’s father held important positions in the Government of British India and also in Pakistan following partition. In August of 1947, Z.H. Khan was appointed as Secretary (Communications and Railways) to the Government of Pakistan and later Chairman of the Karachi Port Trust (1950 to 1953). Masud’s uncle was Chaudhry Nazir Ahmad, a Federal Minister in Prime Minister Liaquat Ali Khan’s cabinet and who later became Attorney General of Pakistan. His sister, Adeeba, was married to Brigadier M. Afzal Khan. While in Karachi, Masud met Elisabeth (a German lady) at Siemens, whose Chairman was Masud’s maternal uncle Zain ud Din Ahmad (Mashriqi’s nephew); Masud and Elisabeth married in the said city on June 26, 1959.

The Royal Pakistan Air Force (later Pakistan Air Force) was born on midnight of August 14, 1947, Pakistan’s independence day. The Force was poor initially - in both qualitative and quantitative terms - and it inherited Squadrons 5, 6, and 9 as well as Maintenance Unit and Aircraft Repair Depot No. 301. The number of pilots, engineers, and non-commissioned officers in the organization at the time was small as compared to its needs. This newly formed force represented the total assets of Pakistan’s Air Force (along with air force stations in Kohat, Peshawar, Risalpur, Chaklala, Lahore, Malir, Drig Road, and Korangi Creek).

With the emergence of Pakistan, Masud opted to join the Pakistan Air Force and, along with other officers, take on the challenge of converting the newly established organization into the one of the best fighting machines in the world. Masud excelled during his days in the Air Force. In the 1950s, he was sent to the Royal Air Force College (RAFC) in Cranwell, England, where he earned the best foreign student award. On February 25, 1957, Masud set up the first 7-Sabre aerobatic team, known as the Falcons, at Muripur (Sabre jets had been inducted into the PAF on June 13, 1956). Air Marshal Asghar Khan selected Masud to organize an air show of the US-made F-86 Sabre jets. On February 02, 1958, Masud led an impressive performance and set a world record at the air show. The book The Story of the Pakistan Air Force: A Saga and Honour described the event as follows: “PAF Stages first-in-the-world 16 aircraft formation loop on Sabre at air display at Mauripur witnessed by King Zahir Shah of Afghanistan.” The following year, on June 15, 1958, Masud founded the Fighter Leaders' School (FLS) at Muripur in Karachi (the FLS’s name was changed to Combat Commanders’ School and today operates from PAF Base Mushaf).

In 1965, war broke out between Pakistan and India. Group Captain (later Air Commodore) Masud was the Base Commander of PAF Base Sargodha. Under Masud’s command, on September 7, 1965, PAF Base Sargodha achieved an important victory over the Indian Air Force, a significantly larger organization. The book The Story of the Pakistan Air Force: A Saga and Honour (TSPAF) stated, “PAF Sargodha [PAF Base Mushaf] inflicts crippling defeat upon IAF [Indian Air Force] in air combats.” The PAF pilots (including Sqaudron Leader [later Air Commodore] M.M. Alam) performed outstandingly and the President of Pakistan, Ayub Khan (accompanied by Air Marshal Nur Khan and General Mohammad Musa), flew to Sargodha to congratulate Masud. The Air Commodore received the President and introduced the pilots to him (see YouTube for a video dedicated to Masud). It was clear that Masud’s courage, tactical planning, guidance and training of the pilots had helped tremendously in achieving superiority over the much larger IAF. Masud was awarded the Hilal-i-Jurat and many of his pilots were also given military awards. And September 7th was declared Yaum-e-Fazia (Pakistan Air Force Day). It continues to be celebrated annually in Pakistan.

Following the 1965 war, Masud was promoted to the rank of Air Commodore and, in 1969, he was included in a high-powered Pakistan Armed Forces delegation to China. The delegation was led by late General (later President) Yahya Khan. During their stay, the delegation members were given a rousing welcome by Chinese authorities. Masud and other members of the delegation also met Chairman Mao Tse-Tung.

In 1970, Masud was assigned command of the PAF East Pakistan (now Bangladesh). He was asked to use force against the Bengalis, but he took a principled stand and proposed a political settlement instead. This difference led to his resignation.

Air Commodore Masud died on October 07, 2003 and was buried in Rawalpindi with full military honors. He shall always be remembered as a hero for his services to the Pakistan Air Force and his country. A Facebook page has been dedicated to him at: facebook.com/AirCommodoreMZafarMasud.