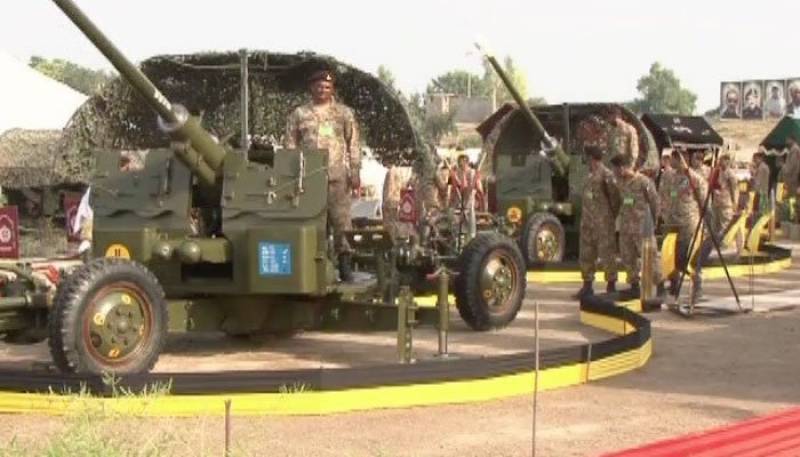 KARACHI/LAHORE - Pakistan celebrates Defence Day on Wednesday  to mark the 52nd anniversary of the 1965 war with traditional fervour and renewed pledge to defend the motherland against all threats.

The celebrations commenced with a change of guard ceremony at the mausoleum of Allama Iqbal in Lahore and Mazar-e-Quaid in Karachi, and a ceremony at the Pakistan Navy headquarters in Islamabad.

Special prayers were offered after fajr in mosques for progress and prosperity of the country. Fateha and Quran Khawani were also held for the martyrs.

It was on this day in 1965 when Indian forces crossed international border in the darkness of night to attack Pakistan but the nation foiled designs of the enemy.

A number of functions are set to be held across the country to mark the day.

The main function of the day will be held at General Headquarters in Rawalpindi to pay tributes to the martyrs.

Functions, seminars and rallies are also being organized in Azad Kashmir today to highlight the significance of the day.

In Muzaffarabad, the main function will be held at Neelum Stadium which will also be attended by AJK President Sardar Muhammad Masood Khan and Prime Minister Raja Farooq Haider Khan.

President Mamnoon Hussain and Prime Minister Shahid Khaqan Abbasi, in their separate messages on Defence Day, paid homage to all those who laid down their lives in defending the motherland.

The President said the government has launched the National Action Plan under which the armed forces, police and law enforcement agencies are successfully rooting out the menace of terrorism and extremism from the country.

The Prime Minister said the nation is stronger today than it was in 1965 and stressed that enemies can only be defeated through strict adherence to the cardinal principles of unity, faith and discipline laid down by the Father of the Nation.

Pakistan is on the path of accelerated development and the country is being viewed as an emerging economy by the global economic community, he said.

Prime Minister Abbasi lauded the professional excellence of Pakistan's military and noted that it has been victorious in the war against terrorism. Operations Zarb-e-Azb, Radd-ul-Fasaad and Khyber-4 have broken the backbone of terrorists, he added.-APP