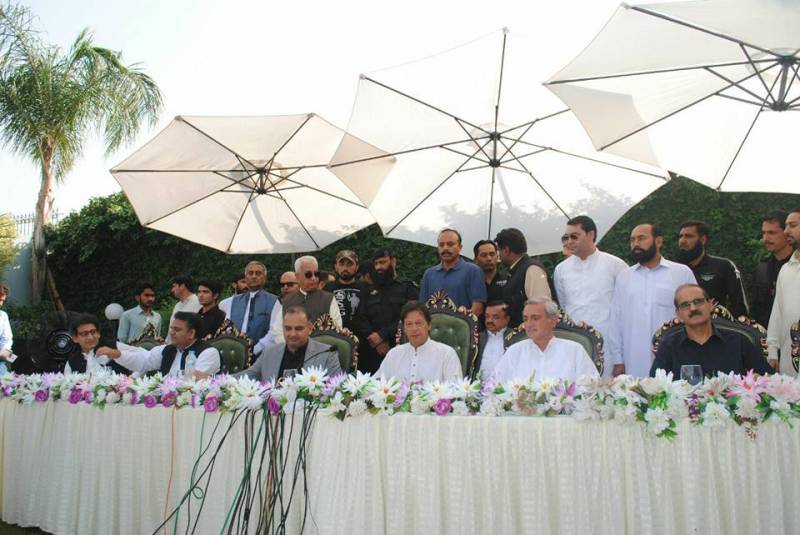 ISLAMABAD - The Pakistan Tehreek-e-Insaf has given another jolt to Pakistan Muslim League-Nawaz' ranks as Ramesh Kumar of ruling party has joined PTI, a formal announcement for the move was announced on Saturday

The disgruntled lawmaker called on PTI chief Imran Khan, who visited Kumar's house in Islamabad for a formal invitation in this regard.

Addressing a press conference after joining Imran Khan-led party, Ramesh Kumar thanked Imran Khan and expressed that he advocated the cause of human rights.

He continued that he had opined his dissenting opinion inside the party and when it became impossible, he wrote columns in leading newspapers as well.

'I respect politicians like CH Nisar' said the minority lawmaker and claimed that many more leaders were set to join PTI in coming days.

Moreover, PTI supremo Imran Khan welcomed Kumar in his party and asserted that even the founder of Pakistan, Quaid e Azam also raised his voice for the rights of minorities.

'Every individual is equal in Pakistan of Quaid-e-Azam' affirmed the cricketer-turned-politician, who visibly looked happy over Kumar's inclusion.

Earlier, on Friday while talking to ARY news, the aggrieved legislator said that his party was unable to address the issues of minorities and he has informed the PML-N's leadership about his decision.

Ramesh Kumar was elected to the National Assembly of Pakistan as a candidate of Pakistan Muslim League (N) on a seat reserved for minorities in the general election, 2013.

He made headlines in 2014 when a video showing him being thrown out of the plane went viral on the social media. He was accompanied by Pakistan Peoples Party leader Rehman Malik at the time.

The incident took place on September 15, 2014 when a citizen Arjumand, turned away the two MNAs from the plane for keeping the passengers waiting. After a hiatus of nearly eight months, an FIR was lodged on April 7 against him for rioting and tendering threats.

Let it be known that many other dissatisfied members of Shehbaz Sharif-led PML-N recently joined Imran's camp, with the most noticeable one MNA Raza Hayat Hiraj.