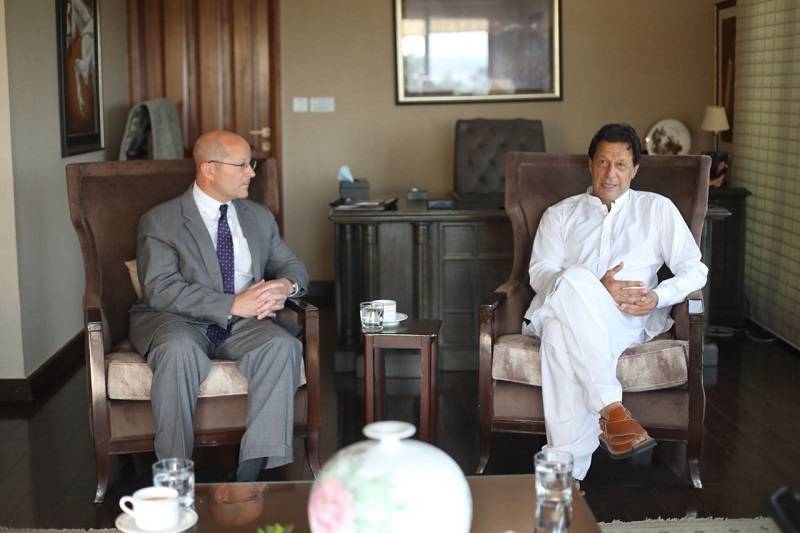 ISLAMABAD - The Acting US Ambassador John Hoover along with a delegation met the Chairman Pakistan Tehreek-e-Insaf (PTI) and Prime Minister-in-waiting Imran Khan at the Chairman’s Secretariat in Banigala, and discussed Pak-US bilateral relations besides other issues of mutual interest.

Talking to the US diplomatic delegation, Imran Khan said that Pakistan desires full stability in Afghanistan.

He said that he always stressed upon to resolve the Afghanistan issue politically, adding it’s a pleasing sign that voices are being raised in the United States also to politically resolve issues.

The PTI chairman said that war and use of force are not a solution to the Afghan issue. A stable Afghanistan is in the interest of Pakistan, the US and the region, he added.

Khan said that Pakistan-US relations witnessed several ups and downs in the history. The PTI chairman said that we want better relations with all countries. “There is a trust deficit between Pakistan and the US,” he added.

Moreover, he said that PTI is determined to strengthen Pakistan’s ties with the United States based on mutual trust.

Imran Khan said that they consider it important for both the countries to have stable trade and economic relations, added that it’s need of the hour that Pakistan and the US establish stronger diplomatic ties.

During the meeting, the acting US ambassador felicitates Imran Khan on his party’s thumping victory on July 25 general elections. John Hoover said that the US wants to strengthen the relationship with Pakistan.