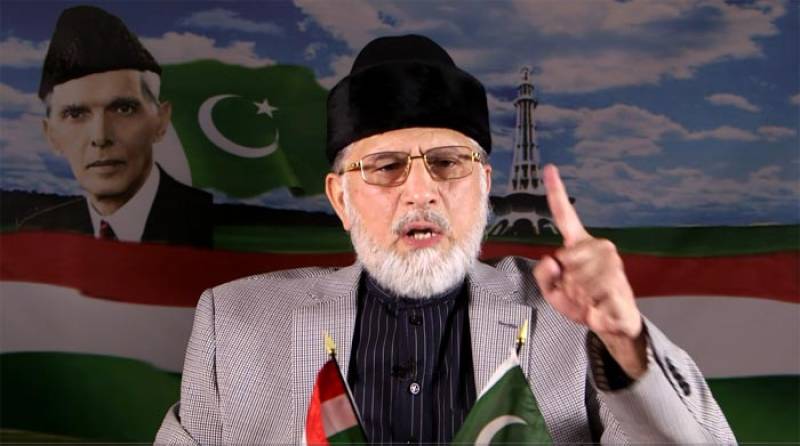 LAHORE - Pakistan Awami Tehreek (PAT) chief Tahir-ul-Qadri on Monday announced to launch a countrywide protest movement against the government on January 17 for failing to bring the responsible for the Model Town incident to justice.

“Our demand of resignations has not been met. We will no more ask for resignations now, but we will take it by force,” the PAT chief said at a press conference following a prolonged steering committee meeting in Lahore.

A meeting of the All Parties Conference had earlier given until January 7 for Rana Sanaullah, and Shehbaz Sharif to resign over the Model Town incident.

The APC had put forward a 10-point statement:

1) All Parties Conference condemns the Model Town incident and the amendment in the Finality of Prophethood declaration.

2) Model Town incident was the worst of state terrorism, in which the leadership of Pakistan Muslim League-Nawaz, including Nawaz Sharif, Shehbaz Sharif and Rana Sanaullah were involved along with bureaucrats, police officers and Punjab government officials. They ordered firing on 100 people on the pretext of an anti-encroachment operation, martyring 14.

3) The amendment in the Finality of the Prophethood is an attack on the faith of hundreds of thousands of Muslims and on the Constitution. Nawaz Sharif and PLM-N as a party were involved in this state terrorism. The mastermind behind amendment in the Finality of Prophethood declaration has neither been brought to the fore nor has the culprit been punished. PML-N has lost the right to hold power after attacking the faith. This conflict will continue till people involved in the crime are taken to task. APC demands the culprits be dealt with an iron fist.

4) APC announced that people martyred and injured on June 17, 2014, in Model Town were not only workers of Pakistan Awami Tehreek but were also citizens of Pakistan. It is the joint responsibility of all the parties in the APC to fight for justice for the people who were fired at. APC owns the efforts that will be undertaken for the purpose. Justice in the Model Town incident will prove to be a milestone for the rule of law.

5) The bereaved families of Model Town incident have got only the report of Justice Baqir Najafi after waiting for justice for three and a half years. This proves that transparent investigation, trial, and provision of justice would not be possible in the case till Nawaz Sharif and Shehbaz Sharif will remain in power. Although 125 police officials were summoned, not a single one was arrested. Not only this, bureaucrats and government officials involved in the murder have not even been summoned. This shows that the incumbent government has failed to deliver justice.

6) Since the report of Baqir Najafi Commission has declared Punjab Chief Minister Shehbaz Sharif and Punjab Law Minister Rana Sanaullah responsible for planning the Model Town incident, the APC demands that they and others involved in the crime step down from their positions before January 7, 2018. APC has mutually extended the deadline of December 31, 2017, to January 7, 2018. If resignations are not given by January 7, the steering committee will organise a meeting on January 8 and decide the next course of action for protest.

7) APC demands that all provincial assemblies and Senate get resolutions approved regarding the resignation demands of Punjab CM Shehbaz Sharif and Punjab Law Minister Rana Sanaullah.

8) Two FIRs of the Model Town incident are filed and the Punjab government constituted two joint investigation teams (JIT) on the issue. These JITs could not record the statements from families of the victims, killed and injured, in the incident. This means that the martyrdom has not been recorded in any of the two JITs. The law required statements from the complainant and victims for the sake of fair trial. Therefore, the APC demands the chief justice of Pakistan to form a JIT taking suo motu notice on the incident which was against humanity, state, and the public. The APC also demands that a judge of the Supreme Court monitors the JIT.