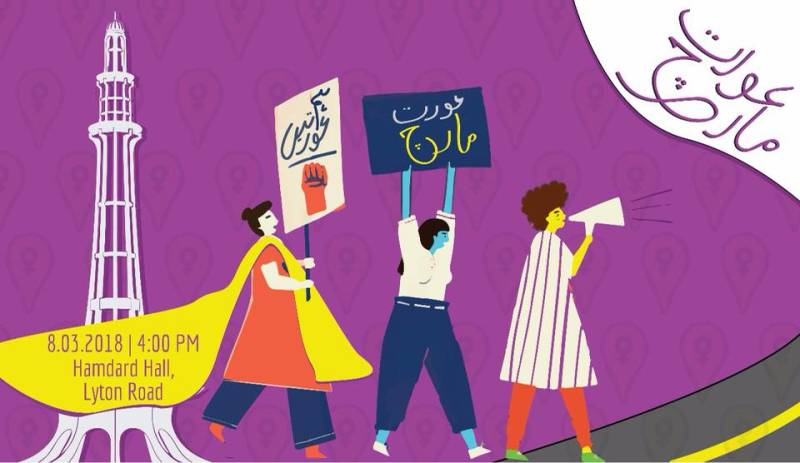 LAHORE – A women’s rally under the banner of ‘Aurat March’ marked the International Women’s Day in Punjab capital city on Thursday, seeing participation of people from all walks of life.

The rally’s participants first gathered at Hamdard Hall, Lyton Road and later marched towards the Charing Cross in front of the Punjab Assembly, to celebrate the women’s struggle and to make a promise together to carry the torch of resistance until the women are treated equally in our society.

About 3.5 kilometer distance was covered in an hour.

The women of the Awami Workers Party, the Feminist Collective, the Women's Collective and Girls at Dhabas participated in the march, during which a tribute was paid to Asma Jahangir for her long struggle as a human rights activist.

The participants expressed their concerns over gender pay gap, non-payment of overtime, and growing violence against women in the South Asian country.

One of the rally’s attendees, a member of Brick Kiln Workers Foundation, told Daily Pakistan that she was there to press for their demand of equal pay and the right to form union.

Another participant expressed his full support to the women, who make 50 percent of Pakistan’s population, in their struggle for equal pay scale.

In order to tackle gender disparities and form a new ‘social contract’, he added, men should also support the idea of safeguarding our women for an improved state of human rights in the country.

March 8 sees the annual International Women’s Day (IWD) campaign theme kick off for the year ahead, although many groups around the world adopt and promote the campaign theme from early in the year.

This year’s theme is Press For Progress. With global activism for women's equality fuelled by movements like #MeToo, #TimesUp and more - there is a strong global momentum striving for gender parity.

The IWD campaign theme provides a unified direction to guide and galvanize collective action by all groups collectively everywhere. So together, let's all Press for Progress!