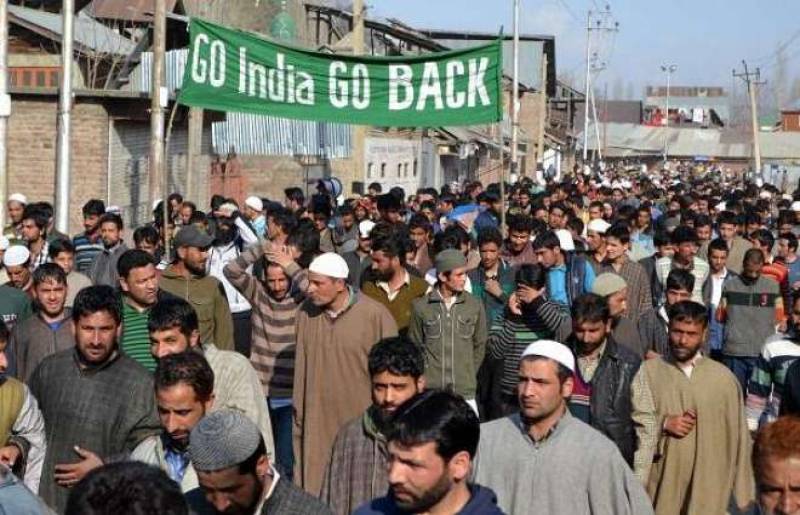 ISLAMABAD - The World Human Rights Day will be observed in Indian occupied Kashmir, tomorrow(Tuesday) as Black Day to draw the attention of the international community towards the worsening human rights situation in the territory.

According to Kashmir Media Service, call for observance of the day has been given by the Chairman of All Parties Hurriyat Conference, Syed Ali Gilani.

The day is celebrated annually across the world on 10 December every year to honor the United Nations General Assembly’s adoption and proclamation, on 10 December 1948, of the Universal Declaration of Human Rights (UDHR), the first global enunciation of human rights and one of the first major achievements of the new United Nations.

The day will be marked with complete shutdown across occupied Jammu and Kashmir to convey to the world community that the lingering Kashmir dispute awaits its active and effective intervention to stop blatant human rights violations by India and to settle the Kashmir dispute in accordance with the relevant UN resolutions.

Meanwhile, amid the military siege and Internet lockdown in the Kashmir Valley and Muslim majority Jammu areas of occupied Kashmir, which entered 127th day, today, more than 24,000 aspirants are facing extreme difficulties in applying for National Eligibility and Entrance Examination (NEET), a highly competitive test through which students seek admissions in medical colleges across India. Restrictions remain in force under Section 144 in the territory.

There are several areas along the Line of Actual Control (LAC) with China and Line of Control (LoC) with Pakistan not having mobile coverage in Ladakh.

As per estimates, the number of such villages and hamlets along the sensitive border areas are numbering more than 350.

Senior Congress leader Shashi Tharoor in a tweet called the tabling of a resolution on Kashmir in US House of Congress an admirable effort.

‘It is an admirable effort by US representatives whereas in our Parliament we have been unable even to have a discussion on the subject of Kashmir in the entire winter session. Shame,’ he said.