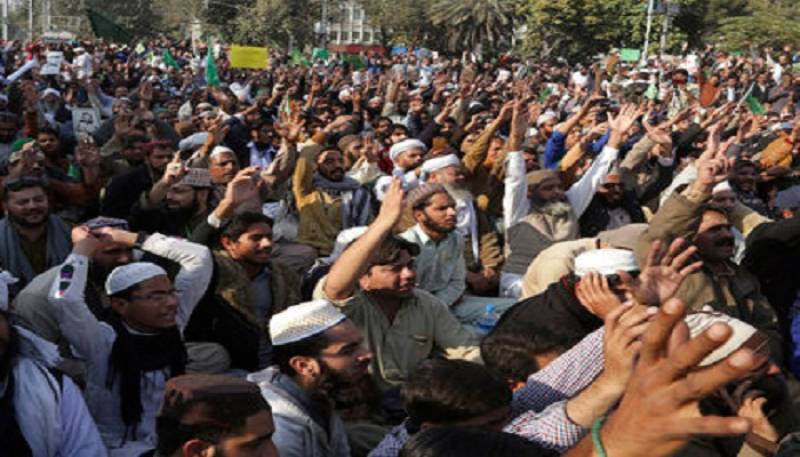 MARDAN - Days after an anti-terrorism court awarded sentences, including the death penalty, to 31 suspects in Mashal Khan murder case, multiple religious parties to take to the streets against their conviction today after Friday prayers in Mardan.

Jamiat Ulema-i-Islam-Fazl (JUI-F), Maulana Samiul Haq's Jamiat Ulema-i-Islam and Jamaat-i-Islami (JI), a coalition partner of PTI-led government in KP, are among other religious parties, which will gather under the 'Khatm-i-Nabuwwat Mardan' banner at a mosque, Dawn News reported.

Mashal, a journalism student of the Abdul Wali Khan University in Mardan, was lynched on April 13 last year by a violent mob on allegations of committing blasphemy, however, investigators found no proof of blasphemy and ruled that the murder was politically motivated.

On Feb 7, ATC Judge Fazal Subhar while announcing the verdict in the heavily guarded Haripur Central Jail imposed the death penalty on Imran Ali, who had confessed to shooting Mashal. The court sentenced five suspects – to 25 years in jail and 25 others are to be jailed for four years.

The court also acquitted 26 accused in the case due to lack of evidence against them.

The JI also held a gathering in Mardan on Wednesday to 'welcome' the person declared innocent by the ATC in the lynching case.

JI's Emir in Mardan, Dr Attaur Rehman talking to the English daily said, "The Haripur ATC honourably acquitted 26 individuals in the Mashal Khan case. This means they are innocent and we have gathered to give them an exemplary welcome".

JUI-F's Provincial General Secretary Shujaul Mulk said that the released suspects will address the protesters and let them talk about about how they were treated in jail.

He said that the acquitted person continued to claim that Mashal had committed blasphemy, adding that they also informed the court about it in their statements.

He also vowed to move the Supreme Court against the conviction of the each person, adding, “We will not remain silent on it”. He added that the provincial government will also be asked to avoid challenging the acquittal of 26 persons in the case as such move may spark protests.

A formal decision in this regard will be made at the gathering on Friday, Mulk said.