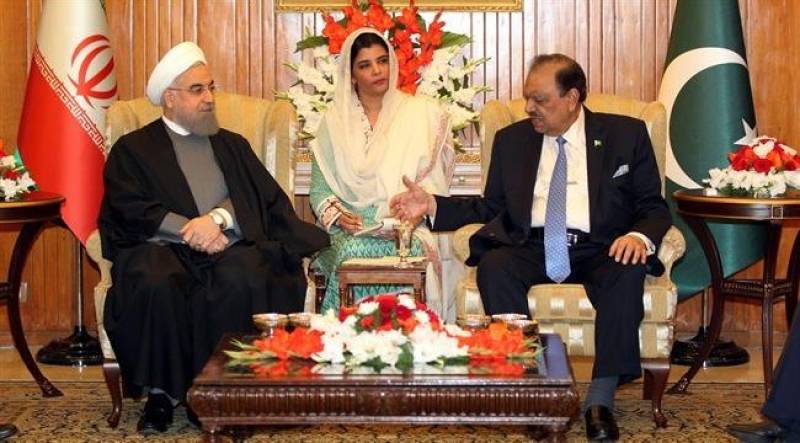 This was agreed in a bilateral meeting between President Mamnoon Hussain and his Iranian counterpart Dr Hassan Rouhani in China.

The meeting took place at Grand Regency Hotel on the sidelines of the 18th Meeting of the Council of Heads of State of Shanghai Cooperation Organization, being held here in the international port city of Shandong province from June 9-10.

As the president arrived at the hotel, a large number of Chinese youngsters, wearing traditional dresses, clapped to welcome him. On his arrival at Regency Hall – the venue of the meeting, Iranian President Dr Hassan Rouhani received him warmly.

Both the leaders shook hands smilingly, in front of the national flags of the two countries.

During the meeting, the wide array of issues were discussed including bilateral relations, regional and global situation.

The president appreciated the statement of the Iranian Supreme Leader Ayatollah Khamenei in support of the just struggle of the Kashmiri people.

Both the presidents agreed that the two countries should further strengthen bilateral economic relations through inter-alia enhanced bilateral trade.

They agreed that connectivity between the two sister-ports of Gwadar and Chabahar would further deepen bilateral ties through enhanced trade and people-to-people contacts.

On the issue of Joint Comprehensive Plan of Action (JCPoA), President Mamnoon Hussain expressed the hope that all parties of the JCPOA would continue to implement the agreement and uphold their commitments.

The two leaders also discussed the current global situation and agreed on the need to focus on upholding principles and rules of international law and amicably resolving various global and regional crises through diplomacy and negotiations.

Discussing the regional situation, the two leaders emphasized that peace and stability in Afghanistan were important for both Pakistan and Iran.