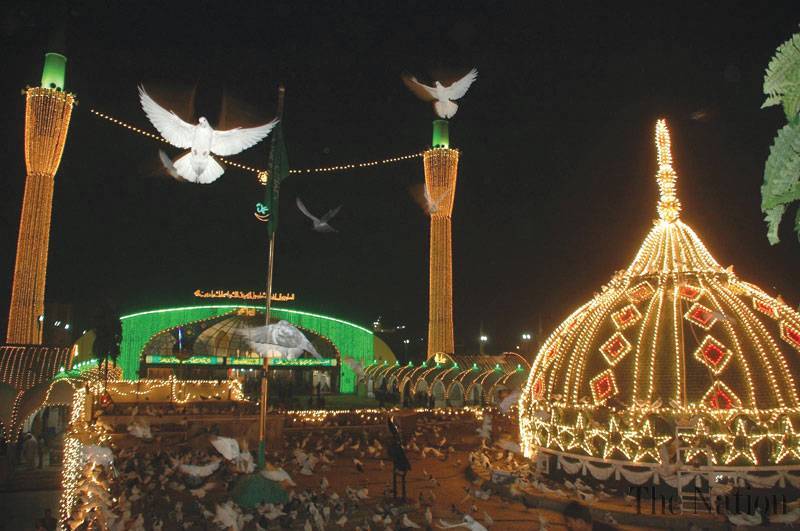 Sufism, defined as the mystical system of the Sufis, is no less than a divine culture weaved into the history of Pakistan. The practice of Sufi customs within the subcontinent is a spiritual and complex discourse itself with not only an extraordinary timeline of tales, it also leads to the establishment of shrines culture. With an evolution of over 1000 years this sacred practice left its mark in the form a spiritual culture that promotes love, tolerance and inclusiveness.

A shrine is recognized as a holy place due to its association with a heavenly personality. Lahore, the city of love, has been known for being packed with shrines and tombs.  Let it be made clear that shrines and tombs originate from the same roots, however, they are both separate branches of remembrance. Sufis like Bulleh Shah, Mahdu Laal Hussain, Mian Mir Qadri and Shah Jamal Qadri became famous by the title of Murshad, which means spiritual leader, although time has proven they were much more than just leaders for even the greatest leaders have tombs but never has one had a shrine. A tomb is regarded as a place of melancholy and sorrow whereas a shrine is a place of hope, love and harmony.

Any king can have a tomb but not a shrine, No king’s tomb can ever bless its people with spiritual enlightenment. - Muhammad Yahya  Khan.

This makes saints not only preachers of love but also the pioneers of shrine culture.  Each shrine having its very own significance, history and custom is cherished in its own way. Specifically focusing in the most notable names of Sufism within Lahore are we come across the names and shrines of  Hazrat Data Ganj Bakhsh, Hazrat Mian  Qadri, Madho Laal Hussain , Shah Jamal Qadri and  Hazrat Shah Inayat Qadri. These darbaars have kept their enfolded saints alive far beyond physical existence. To be in love to such an extent that it develops into an example for witnesses, for that love to become the height of all love to have existed can only lead to the phenomenon of a shrine. The love from a saint to his God is exquisite.

Destroy whatever you please.

But do not break the human heart

for God dwells within. – Bulleh Shah

Hence, it is not the power of a shrine to illuminate a saint but the saint who preached, with such loyalty and sincerity that even after death his teachings are celebrated, observed and deemed endlessly.  Data Darbar and Darbar Madhu Laal Hussain  are such shrines having thousands of devotees offering Fatiha, flowers, chaddar, all year round along with annual festivals which are among the largest festivals within Lahore.

From the eras of the saints till today Sufi culture within Lahore has remained constant and firm, elements like manaat,  chaddar, dhamaal and qauwali unite lovers of all kinds.  Quwali and dhamaal are the melodious sides of shrine culture. Where there is one extreme stating music is strictly prohibited in Islam, there are shrines which on the other hand demonstrate how music is an expression and propagation of love only. Manaat and chaddar are the elements of hopes in this divine culture, these are offerings in hope of a prayer being answered, the prayers, however, are not made to the shrine or Sufi in fact it is believed by devotees that Almighty Allah will listen to their prayers with the reference to his very close lover, the Sufi.  These customs and rituals bring hundreds and thousands of people to shrines every day. It is claimed that shrine is the one place in Lahore that will always have open doors and never will be seen empty. It also said that these places are blessed with food all around the clock, from the rich to the poor from givers to takers there is no uniformity in the type of people to be found at shrines.

Data Ganj Bakhsh was a Persian Sufi and scholar during the 11th century. He was born in Ghazni, Afghanistan (990 AD) during the Ghaznavid Empire and settled and died in Lahore spreading Islam in South Asia. During the festival the shrine is lit with candles and lights, donated food is prepared for the people and Sufies dance around and musicians play music for hours. / AFP PHOTO / ARIF ALI

Shrines are not mosques nor are tombs visited as neither a pilgrimage nor out of religious compulsion. Shrine culture is not only driven into the Islamic societies, moreover, Hinduism and Christianity went through the similar process. The shrine culture highlights the reality that such folk spiritual civilizations are adopted by their geographical features and further into their devotional structure. It represents the unique relationship that these shrines developed with their surroundings. The relationship which is now reflected in the form of Urs.

A beautiful way to conclude this cycle of love is that these Sufis taught their people love through which their people fell in love with Sufism to such an extent that has been marked in the shape of tombs, shrine, and festivals.  One can sense this everlasting preached love in each Darbaar from its festivity, life and ongoing hustle. Even after life.  This mystic system has left an open door to its people in the form of shrines. A place with a cure for all, food for the hungry, roof for the needy, hope for the hopeless, joy for the depressed and hands for the lonely. To think a country so rich in the preservation of lessons of love, harmony and inclusiveness could be a hand in any sort of destruction to world peace seems ridiculous.  Shrine culture carved into the heart of Lahore is a perfect modern day representation of how Pakistan has always remained preacher of love and peace.

Not only does the quantity of devotees or daily visits at shrines shine light upon the love but also if a shrine is viewed from material aspects the reflection of selflessness and love is crystal clear. It is astonishing to see that in a population of worried citizens and issues like unemployment, low wage and inflation these shrines remain spick and span at all times. It an expression of love that the mureed invests not only time and energy but money too. Not a single shrine in Lahore has had to face any compromise in construction in fact each is extravagant in its own way and form. From lights, tiles to doors and hygiene these shrines welcome everyone. Having close terms with religion and spirituality factors like these make all the difference. This culture of inclusiveness and love is a projection to the world that the entire nation is ready to fight war against terror, in the form of Zarb-e-Azb , Rad- ul- Fasad or any other action.

The shrine of Data Ganj Baksh is the most visited shrine within Lahore while the shrine of Shah Madhu Laal Hussain hosts the largest festivals within the city. Each shrine has records of its own.  In an exclusive interview with Baba Muhamaad Yahya Khan he described the structure of Lahore as a diverse land of contradictions. His described favorite city as a place where once can experience love, hate, death, life, destruction, prosperity and every other opposition standing beside each other. Lahore is known as a city of love and tolerance and Baba Yahya Khan best described the city as the city of Sufism, art, kings and lovers.  There are two ideologies in one air here, however, none of them say terrorism none of them spread hate or pain. Lahore is a city where love will be celebrated with great festivity and shrine culture its everlasting proof of this statement.  Lahore gives love and asks for love just like the rest of Pakistan.