Another 'Dharna':JI to stage sit-in at Faizabad, D-Chowk to seek merger of Fata with KP 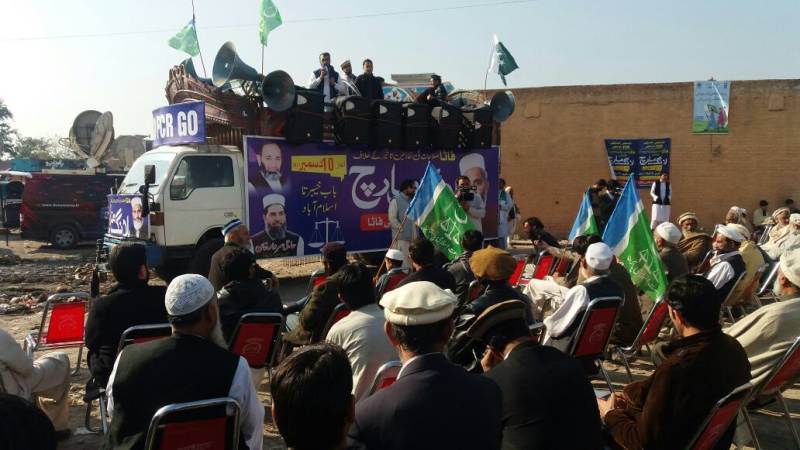 PESHAWAR - Thousands of people from the Federally Administered Tribal Areas (Fata) and members of Jamaat-e-Islami (JI) left for Islamabad on Monday after spending a night at JI’s secretariat. JI leaders would hold public gatherings and address participants on their way Islamabad, urging the masses to join them for Fata’s merger with Khyber Pakhtunkwha.

The protesters have announced to stage a sit-in at Faizabad area on Tuesday followed by another sit-in at D-Chowk to press their demands.

According to JI media cell, party leadership would address public gathering in Pabbi at 10am and another gathering at Nowshera’s Shobra chowk at 11am.

Participants of the march would also be addressed after reaching Khairabad the fourth gathering would be held in Taxila. JI’s provincial ameer Mushtaq Ahmad Khan and Fata ameer Sardar Khan would lead the march.

The JI's long-march, which started from Bab-i-Khyber, is aimed at exerting pressure on the federal government to revoke the Frontier Crimes Regulation (FCR) and merge the Fata with KP before 2018 general elections. The caravan was en route to the capital on Monday night.

Meanwhile, the government on Monday failed to table a bill in National Assembly pertaining to FATA's merger with Khyber Pakhtunkhwa province, drawing the opposition's ire over the delay.

Lawmakers from the Pakistan Peoples Party (PPP), Pakistan Tehreek-e-Insaf (PTI) and those from FATA tore copies of the assembly agenda in protest over the delay.

MNA Shahabuddin, who is also a member of the ruling Pakistan Muslim League-Nawaz (PML-N) from FATA, protested over the change in the assembly agenda. He was joined by other lawmakers from tribal areas.

The protesting members said the agenda included the FATA Reforms Bill and questioned why it was changed.

Sheikh Aftab Ahmed, minister for parliamentary affairs, said a debate on FATA reforms was temporarily postponed and the matter would soon be made part of the assembly agenda.

"There is further consultation required on the bill, which is why it was not tabled," Aftab explained.

Opposition Leader Khursheed Shah also criticised the government for putting the matter on hold and referred to the entire episode as a "joke".

"Another joke was played today. The matter is under process since the incumbent government came into power and it is beyond comprehension as to why the matter was excluded from the agenda after its inclusion," Shah said.

"The entire nation wants FATA to become a constitutional part of the country, but the government is merely passing its time in the parliament."

PTI's Shah Mehmood Qureshi lamented that all the members of the House were given agenda of Monday's session a night before, which had the FATA Reforms Bill, but it was excluded from the agenda copies distributed today.

"They are showing us the way that issues are resolved through sit-ins, not by the parliament," Qureshi said.

The opposition members rejected all explanations furnished by the treasury.

Later, all opposition members walked out of the assembly hall, after which the session was adjourned until 10:30am on Tuesday.

The recommendations to bring FATA at par with the rest of the country were approved at the Cabinet meeting on FATA reforms on March 2.

Once FATA is made part of KP, the province's share in the National Finance Commission will increase, as 3 per cent will be earmarked for the region.

The KP Assembly had adopted a resolution on December 14, 2016, in favour of merging FATA with KP that would help rehabilitate and reconstruct the infrastructure including roads, communications, power lines, water supply, education and health facilities.