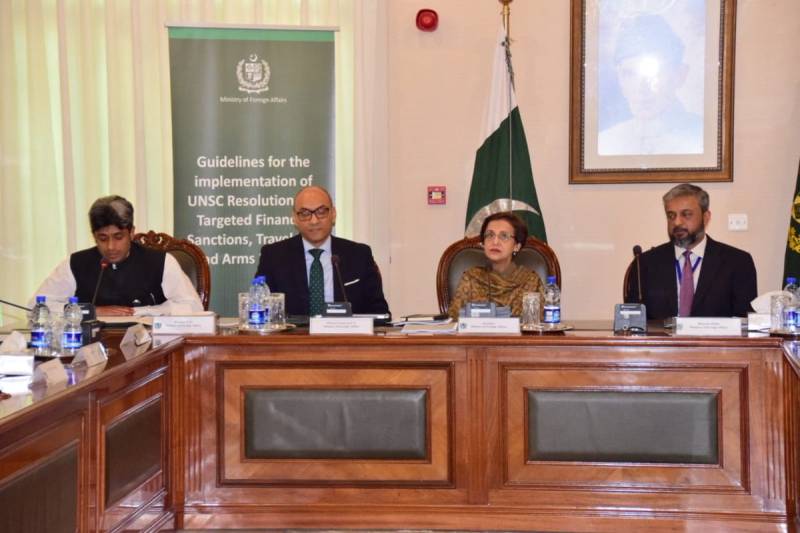 ISLAMABAD – Pakistan on Friday launched the guidelines for the implementation of the UNSC 1267 sanctions at the Ministry of Foreign Affairs after consultation with stakeholders and in compliance with international standards.

A large number of representatives of the federal and provincial governments including those of financial institutions, law enforcement and other implementing agencies attended the event, said a news statement issued by foreign office.

On the occasion, Foreign Secretary Tehmina Janjua underscored that Pakistan had managed to turn the tide in the fight against terrorism for which there were no parallels.

She said it was important to further consolidate these gains through full implementation of National Action Plan (NAP).

These guidelines have been formulated in consultation with stakeholders and in compliance with International standards.@UN_OCT @UN_CTED @FATFNews @UN

FS Janjua underscored that Pak has turned the tide against terrorism.

She expressed hope that the guidelines would assist all stakeholders in better discharging their int obligations under the @UN Sanctions regime. @UN_OCT @UN_CTED @FATFNews

Janjua added that Pakistan also had to be mindful of fulfilling its international legal obligations including the implementation of the United Nations Security Council Sanctions which have been adopted under Chapter VII of the UN Charter.

The foreign secretary hoped that the guidelines would assist all stakeholders in better discharging their responsibilities for the effective implementation of the UN Sanctions.