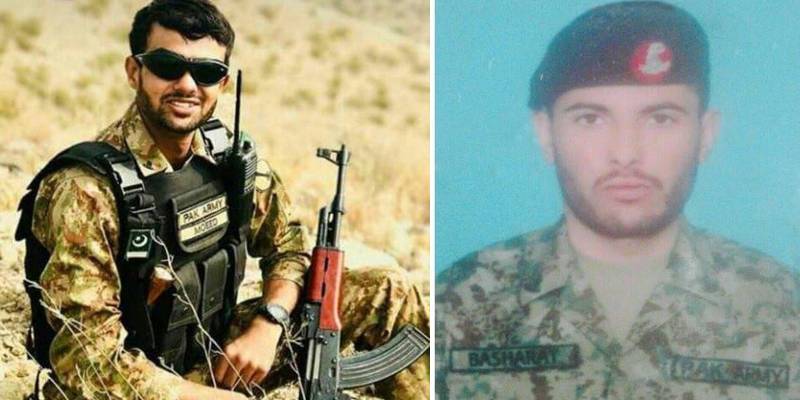 RAWALPINDI - At least two troops of Pakistan Army was martyred during a terrorist attack in North Waziristan on Tuesday.

According to Inter-Service Public Relation (ISPR), the incident took place when suspected terrorists open fire on a vehicle of security forces.

'He was the eldest of four siblings and loved me very much' said the mother of the deceased soldier.

However, Sepoy Basharat is a resident of a village in Gilgit-Baltistan.

On the martyrdom of young troopers, Chief of Army Staff (COAS) General Qamar Javed Bajwa said: "Freedom isn't free, it costs sons of the soil. Freedom that we enjoy today is owed to so many such bravehearts. Salute to our Martyrs".

"Freedom isn't free, it costs sons of the soil. Freedom that we enjoy today is owed to so many such bravehearts. Salute to our Martyrs"COAS. pic.twitter.com/GVTOnmTrWn

On the other hand, Prime Minister Shahid Khaqan Abbasi condemned the incident of terrorist attack.

The Prime Minister extended his heartfelt condolences to the bereaved families and prayed to Almighty Allah for blessing the departed souls with eternal peace.

The Prime Minister stated that these matchless sacrifices of precious human lives, in the war against terrorism, will always be remembered as they form the most important aspect of our national history.

"They have sacrificed their most valuable asset for the sake of our homeland. There is nothing material to match up to their sacrifices. As a nation, we will never forget the greatest contributions of our valiant Armed Forces in the war against the enemies of our country", stated the PM.

The Prime Minister stressed that Pakistan, by the grace of Almighty Allah, has defeated the monster of terrorism by breaking the backbone of terrorists' network across the country.

Earlier in September, 22-year-old lieutenant Arslan Alam was martyred in a terrorist attack on the Pakistani post in Rajgal valley area of Khyber Agency in Khyber Pakhtunkhwa.