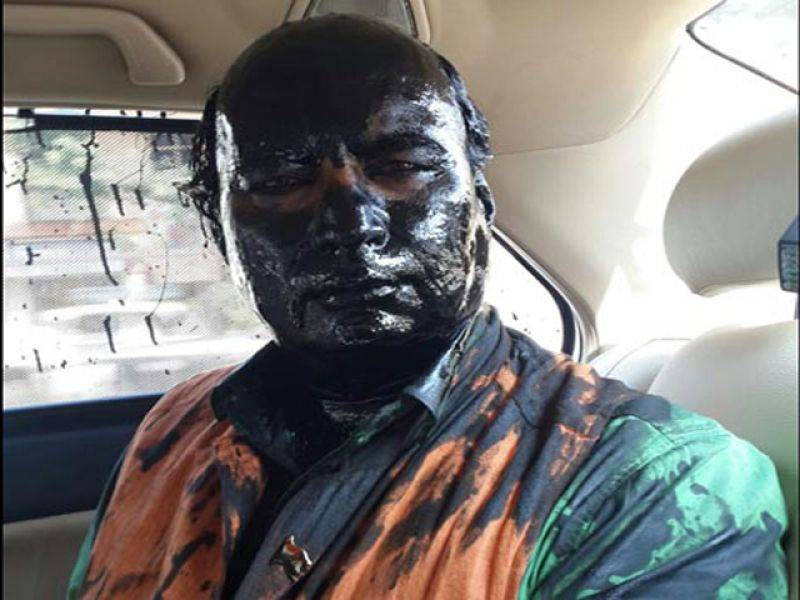 MUMBAI (Web Desk) - Top diplomat Sudheendra Kulkarni said on Monday that Shiv Sainiks smeared black ink or paint on his face to protest the launch this evening of a book on foreign policy by Khurshid Kasuri, Pakistan's former foreign minister.

Kulkarni, who is scheduled to be moderating a discussion at the launch of "Neither a Hawk, nor a Dove" said the incident occurred as he was leaving for his office and while he was in his car near Kings Circle.

"The ink attack on Kulkarni is a mild reaction from Sena, this is not ink but the blood of our Soldiers," said Shiv Sena parliamentarian Sanjay Raut, after the incident.

The Mumbai police said that following the incident with Kulkarni, it is holding a meeting to review the law and order arrangements for the event.

The Shiv Sena had asked officials at the Nehru Planetarium, the venue for the book launch, to call off the function.

The Shiv Sena warned that the event will be disrupted if it isn't canceled because of Pakistan's support for terrorism.

"For all foreigners, diplomats or foreign dignitaries who are allowed on a proper visa in our country, it's the responsibility of our government to provide them security.

Hence Mr Kasuri and the programme will be provided total security," the chief minister had earlier said.

"But this does not mean that we endorse all his views. No anti-India propaganda will be tolerated through any such programme, and if found so (sic), the organizers would be held responsible," the chief minister added.

Last week, despite assurances of protection from Fadnavis, a concert by Pakistani singer Ghulam Ali was cancelled by the organizers following threats by the Sena.

Maharashtra's BJP spokesperson, Madhav Bhandari, said the party will look into the incident and take appropriate action against those involved.