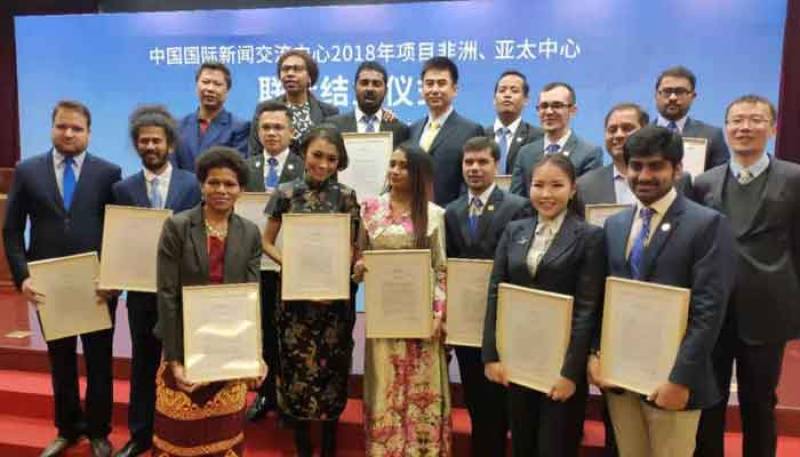 BEIJING - Two journalists from Pakistan along with 43 media persons from 42 countries of Asia-Pacific and Africa successfully completed their ten-month training programme here on Wednesday.

Addressing the joint closing ceremony, Vice President, China Public Diplomacy Association, Zhang Jiuhuan called upon the journalists to play the role of a bridge and make positive contributions to promoting relations between China and their respective countries.

He expressed the confidence that they would also make efforts to enhance people to people contacts between China and the Asia Pacific and African countries.

While congratulating the journalists on the successful completion of their training project and their contributions to promoting mutual understanding between China and their countries, he said, “Through your pens and cameras, the people of Africa and Asia-Pacific countries have gained a more objective understanding of the current economic and social development situation, traditional culture and long history of China.”

Zhang Jiuhuan said this year marked the 40th anniversary of China's reform and opening up.

Over the past 40 years, with the support of the international community, the Chinese people had made historic achievements in development through unremitting efforts.

He believed that they had gained a deeper understanding of the achievements and course of China's reform and opening up in the past 40 years.

During their 10-month stay in China, these journalists witnessed and reported on the annual meetings of the China Two Sessions and the Bao Forum for Asia, the SCO Qingdao Summit and the First China International Import Exposition.

They visited Shanghai, Tianjin, Hainan, Hubei, Guangdong, Guangxi and other provinces for thematic interviews, attended special events such as high-end forums of Chinese and foreign media and think tanks, and participated in relevant China.

They were also imparted professional training in information and journalism.

Certificates were distributed among the journalists upon successful training programme.

The closing ceremony was also witnessed by the Beijing-based foreign diplomats and senior Chinese officials.