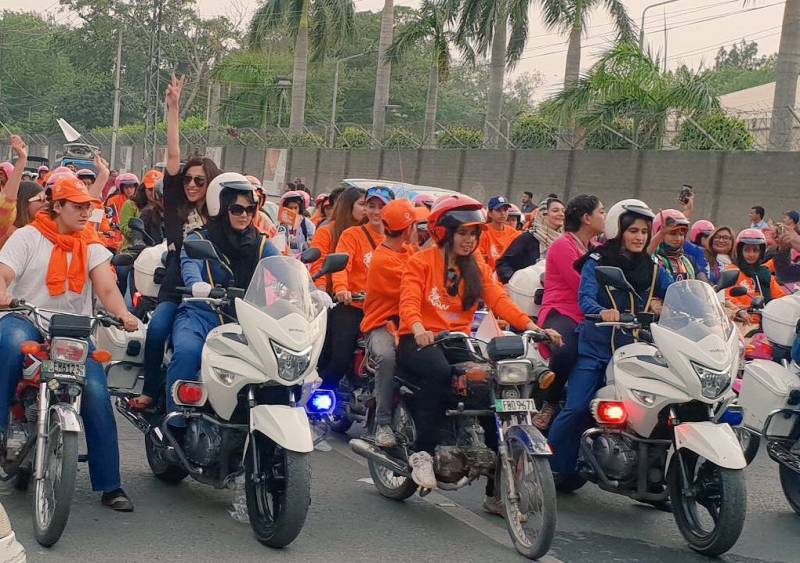 Lahore- Punjab government has been supporting women empowerment and independence from some time now. Today the roads of Lahore were dominated by women who are taking another step to reclaim the roads. In order to be successful in life one must be independent and it can go to the most basic level like independent commute.

The rally started from Alhamra where the organizers and the participants interacted. National anthem was played by talented artists.

This rally was organized by Punjab government and prominent names like Meesha Shafi, Juggun Kazim, Zenith Irfan and Nighat Dad were seen participanting. Not only this but Chief Minister of Punjab has introduced subsidized motorbike scheme for women. Promotion of women mobility is now a new trend in Pakistan which will help a lot of females to act independently.

Beauties! The customized #WomenOnWheels motorbikes are here at the event! Today will be the first day ever in #Pakistan when a government has officially empowered #Women with mobility- @CMShehbaz delivers! #Wow #IamWow #AttendtheRally pic.twitter.com/3KZz3HGPDi

Munizae Jahangir on women empowerment before the rally:

. @MunizaeJahangir appreciates the steps that have been taken by Government of Punjab for empowering women. One such step she talks about is “Women Protection Act” which was passed in Punjab under which first Violence Against Women Center was established in Multan #WomenonWheels pic.twitter.com/6sH46vz04j

What a liberating experience! Riding with these amazing women at the #WOW #WomenOnWheels rally today! Did somebody say I fled to Canada? LOL 😂
This is Egerton Rd Lahore ✌🏼❤️💥 pic.twitter.com/k8YmaBURfY

More women on bikes in near future:

You will see now more women on bikes in coming days. Also ignore my screaming, I am just too excited! #WOW #WomenOnWheels pic.twitter.com/S9cQRWnnm1

A great step towards brighter future:

The #WomenOnWheels program was introduced by the Chief Minister's Strategic Reforms Unit to give women greater empowerment through mobility, and has trained more than 3500 women to this date. Check out this AMAZING initiative! 🚘🏍🚖 #VoicesOfSolidarity https://t.co/TuWypxqHUA

Women are coming together to bring a change: