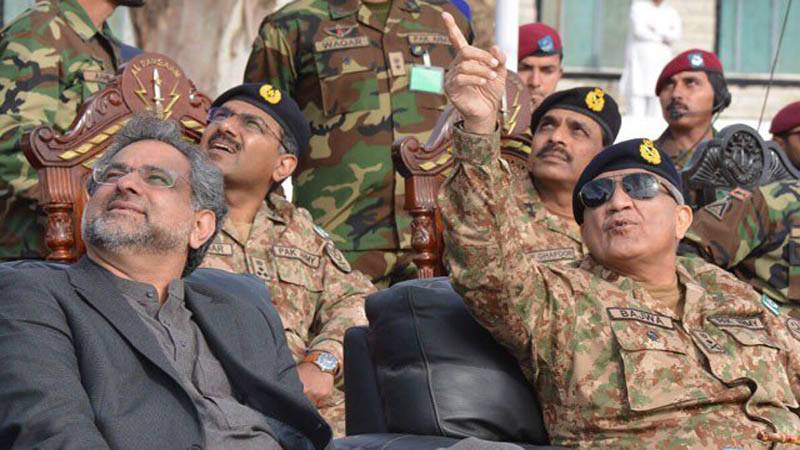 ISLAMABAD - Prime Minister Shahid Khaqan Abbasi and the Chief of the Army Staff General Qamar Javed Bajwa will visit Saudi Arabia today on a day-long trip, where they will inspect the exercises of the 41-country Islamic Military Counter Terrorism Coalition (IMCTC).

Defence Minister Engineer Khurram Dastgir Khan will be the lone minister who has been made part of the crucial entourage.

The civil and military chiefs are visiting Saudi Arabia for the first time after Pakistan dispatched troops to the Holy Kingdom to train Saudi military forces, two months ago.

Prime Minister Abbasi and General Bajwa will also discuss the regional security situation and matters pertaining to developments in the Islamic world, especially the middle east.

The situation in Syria will also come up for deliberations during the meetings, in the backdrop of attacks by US-led western alliance.

It is worth mentioning that Saturday's tour is the fourth visit of PM abbasi to Saudia Arabia since he assumed office, after the ouster of Nawaz Sharif in Panama Papers scandal by Supreme court.

Moreover, the Islamic Military Counter Terrorism Coalition (IMCTC) is a willing coalition of 41 countries sans Iran that forms a pan-Islamic unified front in the global fight against terrorism and violent extremism.

The IMCTC is led by former Pakistani military chief General (r) Raheel Sharif who is currently in Lahore to attend the wedding ceremony of his son.