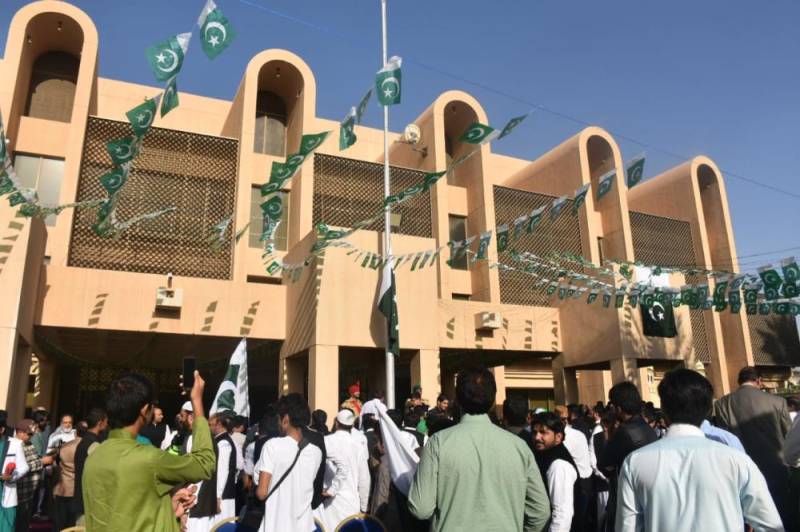 RIYADH/JEDDAH - The Pakistan Embassy in Riyadh and the Consulate General in Jeddah celebrated the 72nd Pakistan Independence day with patriotic zeal and fervor.

On Tuesday, Ambassador Khan Hasham Bin Saddique hoisted the national flag in a ceremony at Pakistan Embassy to commemorate the Independence Day.

Arshad Munir, consul (Press), said in a press statement that the ceremony was attended by hundreds of people, including families, from the Pakistani expatriate community.

Messages of the president and the prime minister of Pakistan were read out to all present.

The ambassador paid homage to the sacrifices of freedom fighters and leaders of the Independence struggle. Further, he highlighted the successes that Pakistan has made in various sectors over the years and the crucial role played by the expatriate community.

The ambassador expressed his gratitude to the Kingdom of Saudi Arabia for always supporting Pakistan and its people. He emphasized the special place for Saudi Arabia in the heart of every Pakistani.

He told the audience to never lose sight of the guiding principles of unity, faith and discipline as stated by the father of the nation, Quaid-e-Azam Muhammad Ali Jinnah.

Consul General Shehryar Akbar Khan raised the national flag, to mark the day, in front of a large number of Pakistanis who had arrived from different parts of Jeddah to participate in the event.

The national anthem was played while the national flag was being raised. A smartly turned out contingent of Pakistan Army and Pakistan Navy was also present on the occasion.

In his address, the consul general said this day was a reminder of the struggle undertaken by the Muslims of the subcontinent under the leadership of Quaid-e-Azam Jinnah and Allama Iqbal for a separate homeland where they could live their lives with freedom and dignity.

"It is my belief that with an honesty of purpose and devotion to the national cause we will succeed in our mission of elevating Pakistan to its rightful place in the comity of nations," he added.

The Pakistan high commission and the Pakistani community-based in Sri Lanka Tuesday celebrated the Independence Day of Pakistan with national zeal and enthusiasm and the commitment to protect the country against perils.

Messages of the president and prime minister of Pakistan were read out on the occasion, a message received here from Sri Lanka said.

The acting high commissioner speaking on the occasion said Pakistan had established diplomatic relations with Sri Lanka, immediately on her independence, in 1948. Since then these relations, based on mutual understanding and common interest, have flourished continuously.

To celebrate 71st Independence Day of Pakistan, a flag hoisting ceremony was held at the Embassy of Pakistan in Brussels, in which Pakistani community in Belgium and Luxembourg participated in large number, with full enthusiasm.

Pakistan’s Ambassador to the European Union, Belgium and Luxembourg Naghmana A Hashmi raised the flag while the national anthem played in the background, a message received here from Brussels said.

In her address, Ambassador Hashmi called upon following Quaid-i-Azam’s principles of Unity, Faith and Discipline in better interest and spirit for achieving respect in the community of nations. She said that our identity remains Pakistani no matter where we go in the world.

An exhibition of pencil sketches of Quaid-i-Azam by an Antwerp based Pakistani artist Tajammul Hussain was also arranged on the occasion. A painting competition of children on the theme “Mera Piyara Pakistan” was also arranged in which more than 30 children participated in two categories.

A simple yet dignified flag hoisting ceremony was held at the Pakistan Embassy in Paris on Tuesday to celebrate the country’s Independence Day.

Members of Pakistani community, officers and officials of the Embassy, their families and media persons attended the ceremony in large number.

Special messages of the President and the Prime Minister felicitating the Pakistani nation on this auspicious occasion were read out, a message received here from Paris said.

Pakistan’s Ambassador Moin-ul-Haque in his address congratulated the Pakistan community and entire Pakistani nation on this historic occasion.

He paid rich tribute to founding fathers for their tireless efforts and countless sacrifices for the creation of Pakistan. The ambassador congratulated the people of Pakistan for exercising their right to vote which for the first time in the country’s history would mark a peaceful transition to a third democratic elected government.

The Jinnah Award was instituted this year by the Embassy of Pakistan to France to acknowledge academic achievements of Pakistani students in France. - APP

ISLAMABAD - The Supreme leader of Iran Ayatollah Syed Ali Khamenei has felicitated the Pakistani nation on the ...