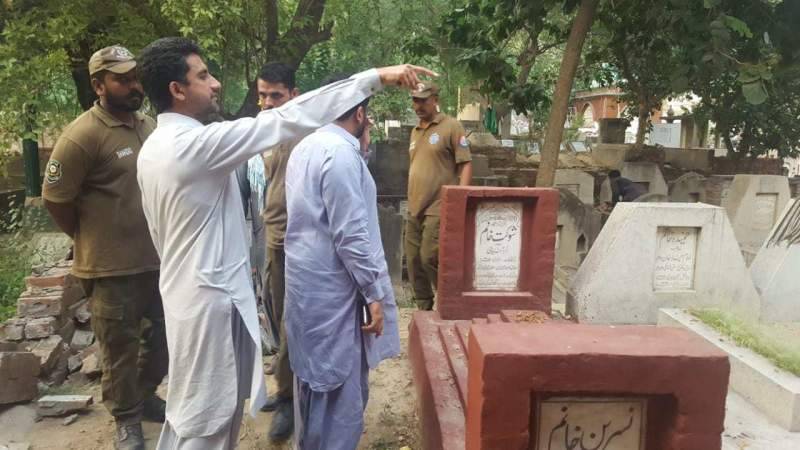 LAHORE – Authorities in Punjab capital have demolished nearly all the illegal constructions at Mian Mir Graveyard, in an anti-encroachment drive launched by Punjab government on the directives of Lahore High Court (LHC).

The graves, where such structures were razed on Friday under the supervision of Cantt Assistant Commissioners Capt (r) Shahmeer Iqbal, included the final resting places of Prime Minister Imran Khan’s mother and other relatives.

The mother of PM Imran, Shaukat Khanum died in 1985 after fighting cancer for years. In her memory, Khan in 1994 founded a chain of research-oriented tertiary level oncology hospitals - under the umbrella of Shaukat Khanum Memorial Cancer Hospital and Research Centre (SKMCH&RC) - in Lahore and Peshawar. A third hospital is under construction in Karachi.

The SKMCH&RC is Pakistan's largest cancer hospital and home to the largest radiation oncology centre.

Besides targeting the structures around Khanum's grave, the authorities removed the window panes and doors from a number of shrines inside the graveyard in Lahore's Mian Mir area during the anti-encroachment operation.

Custodians of these shrines argue it was an illegal operation as they had already taken approval by the Auqaf department. No written orders were even presented by the authorities, they added while demanding an action against the officials concerned.

Last month, Justice Ali Akbar Qureshi of the LHC had issued the order for removing all illegal settlements across Punjab, especially the provincial capital, during a hearing on a petition filed by a citizen.