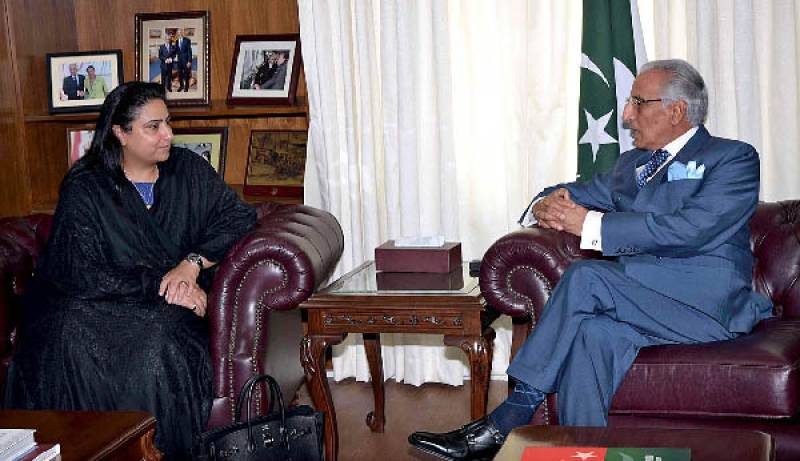 ISLAMABAD - Pakistan is scheduled to hold 1st Pakistan-Bahrain Business Opportunities Conference later this year in collaboration with the Ministry of Industry, Commerce and Tourism of Kingdom of Bahrain.

The conference will focus on investment opportunities in the field of agriculture products, meat, fruits and vegetables, banking, aviation services, jewellery, chemicals, footwear, furniture and textile.

A delegation of Bahrain Government lead by Shaikha Rana bint Daij Al-Khalifia,Assistant Under Secretary for Arab and Afro-Asian Affairs and Organizations Directorate and a member of the Royal family of Bahrain called on Minister for Commerce Khurram Dastgir Khan in Islamabad and discussed the plan to re-engage the two countries into fruitful economic dialogue.

The Minister informed the visiting delegation that Pakistan is opening a new commercial office in Bahrain.

A Commercial Councilor has been appointed and will assume office in the next few weeks. Shaikha Rana informed the meeting that the Economic Development Board of Bahrain will open its office in Karachi soon to keep abreast with the business and investment opportunities appearing in Pakistan.

The meeting also decided to constitute Pakistan-Bahrain Business Council and make the Business Opportunities Conference a permanent feature of economic engagement between the two countries.

Javed Malik, Pakistan Ambassador to Bahrain said that Bahraini people of Pakistani origin who are in Bahrain since three generations will prove to be a catalyst for investment in Pakistan.

Minister for Commerce said that the challenge for two Governments is to establish convenient procedures to facilitate the businessmen in each other countries.

Dr Shaikha Rana informed that Bahraini Foreign Minister and Speaker of the parliament will visit Pakistan in the coming months, which suggest the seriousness and urgency of the Bahraini Government to boost economic ties between the two countries which have huge potential to grow.

The meeting was informed that Gulf Air, national carrier of Bahrain is planning to enhance its footprints to Lahore, Sialkot and other cities of Pakistan.