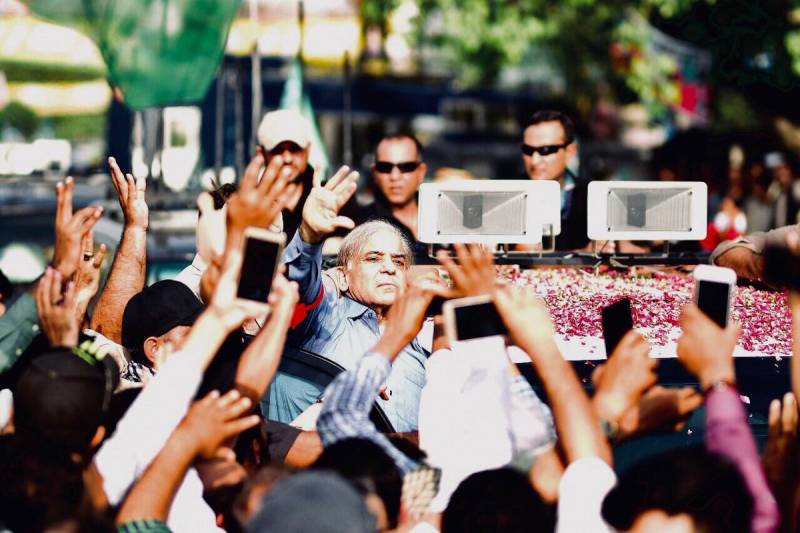 LAHORE - Pakistan Muslim League-Nawaz (PML-N) president Shehbaz Sharif on Saturday lashed out at authorities for their decision to try ousted prime minister Nawaz Sharif and his daughter inside Adiala jail, vowing to turn every campaign rally for his election into a protest.

“We've come to know Nawaz Sharif and Maryam Nawaz have been taken to Adiala jail and they'll be tried inside the jail. Only terrorists are tried inside a jail,” Sharif told a press conference in Lahore.

“This is wrong. What message do you want to send across the country? We faced a similar trial during Musharraf’s’ dictatorship” he said.

The 66-year-old said that his party would utilise all legal options to defend Nawaz Sharif and his daughter. “This is our constitutional right to knock at the door of justice.”

He called on his supporters and masses to vote for lion in the coming election to steer the country out of crises.

On Friday night, the former premier and his daughter, who were convicted in the Avenfield Apartments reference, were arrested upon their arrival in Lahore and were subsequently taken to Islamabad in a chartered flight.

The father-daughter duo were then separated and taken from the Islamabad International Airport in two convoys to the Central Jail in Adiala, Rawalpindi.

Shehbaz Sharif, who led a massive rally to airport Friday night, also lamented that an FIR was lodged against the leadership of the PML-N. “People were not brought to greet Nawaz Sharif. They had come by themselves,” he said.

However, he said, the police “used tear gas and baton-charged our workers in the rally. “Those assaulting PML-N workers will be brought to book,” he added.

This is how the people have responded today despite all the heavy odds; road blocks, arrests of our workers & suspension of mobile / internet service .. Almost 8 hours since we left from Lohari gate for the airport. Some of the images when we left earlier today pic.twitter.com/PKZNRIs6Bo

Earlier on Saturday, twelve cases against PML-N workers and leaders including party president Shehbaz were registered in different police stations of Lahore. The interim Punjab government had imposed Section 144 of the Criminal Procedure Code (CPC), a law concerning the maintenance of public order, ahead of Nawaz and his daughter Maryam's arrival.

Among the PML-N leaders named in the cases are Javed Hashmi, Uzma Bukhari, and Marriyum Aurangzeb. Also accused of different charges including attempt to murder, and terrorism are Mubashir Javed, Raja Zafarul Haq, and Mushahid Hussain.

The cases registered at different police stations in Lahore include charges of intervention in the state's affairs and vandalism.

The junior Sharif also questioned NAB's failure to probe scandals involving billions of rupees. He urged Election Commission of Pakistan (ECP) to take notice of the recent actions of NAB and caretaker governments.

Furthermore, he warned that all political parties would gather at singe platform to launch protest if transparent polls were not held.