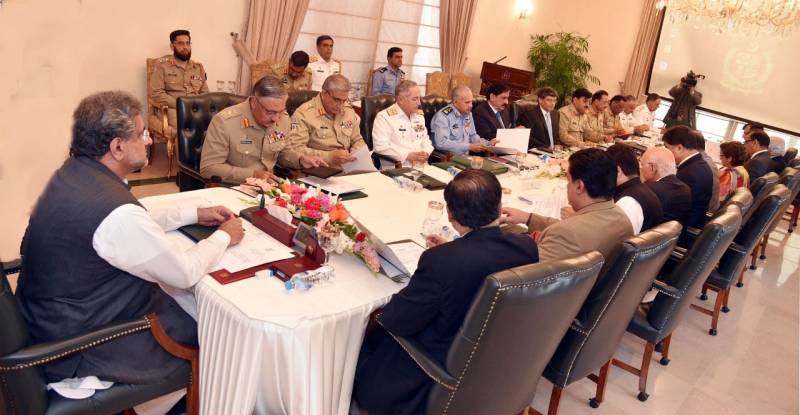 ISLAMABAD - The National Security Committee has unanimously rejected the allegations and condemned the fallacious assertions stemming out of a recent statement regarding Mumbai attacks, terming it 'incorrect and misleading'.

The participants of the high-profile meeting, under the chair of Prime Minister Shahid Khaqan Abbasi, observed that it was very unfortunate that the opinion arising out of either misconceptions or grievances was being presented in disregard of concrete facts and realities.

According to a communique released on Monday, the NSC meeting recalled that it was not Pakistan, but India that had delayed the finalisation of the case.

The senior civil-military officials also agreed that India denied access to the principal accused, Ajmal Qasab, and his extraordinarily hurried execution became the core impediment in the finalisation of the trial.

"At the same time Pakistan continues to wait for cooperation from India on the infamous Kulbhushan Jadhav and Samjhota Express episodes," the statement added.

The National Security Committee also resolved that Pakistan shall continue to play its due role in fighting the war against terrorism on all fronts.

Besides the NSC huddle, premier, Shahid Khaqan Abbasi will hold a crucial press conference, later in the day to reveal the details regarding the discussions that took place in the high-profile meeting.

The NSC meeting was called days after former premier, Nawaz Sharif delivered a statement that was spun by the Indian media as a tacit admission of Pakistan’s involvement in the 2008 attacks that left 166 people dead.

Sharif, who has been disqualified to hold public office for life by the Supreme Court in the Panama Papers case, in an exclusive interview with Dawn slammed the slow probe and questioned the authorities who allowed the Mumbai attacks ‘to take place from Pakistan soil’.

Criticising the country’s foreign policy, Sharif had added: “We have isolated ourselves. Despite giving sacrifices, our narrative is not being accepted. Afghanistan’s narrative is being accepted, but ours is not. We must look into it.”

Soon after the statement, Indian media outlets gave a twist to the story and started portraying Pakistan in a bad light, out of context.

Nawaz’s remarks being twisted out of context: Shehbaz

Pakistan Muslim League-Nawaz President Shehbaz Sharif on Sunday said that Nawaz’s interview was twisted out of context by his political opponents.

In his address at a public rally in Sindhri, the Punjab chief minister said that India is conspiring against Pakistan by using Afghan soil.

“Our mothers and sisters are being killed in Kashmir. Almighty has made Pakistan a nuclear state. If India casts an evil eye upon Pakistan then the army and people of Pakistan will give a befitting reply,” he said.