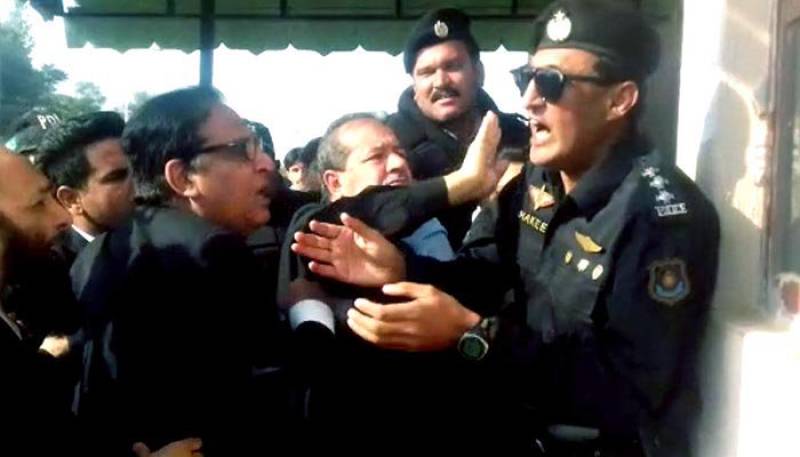 ISLAMABAD - Police have registered a case against lawyers for slapping and pushing an inspector while he was performing duty at the accountability court yesterday (Friday) ahead of the indictment of Sharif family.

A video surfaced on Friday in which a group of lawyers can be seen manhandling with a police officer, later identified as Inspector Shakeel Ahmed.

The person who slapped the police official has been identified as Khawar Ikram Bhatta, who had been vice president of high court bar and reportedly active member of the PML-N lawyers' wing.

A brawl between the legal fraternity and forces erupted when police official barred non-essential person, including lawyer from entering the court premises due to hearing of high profile corruption cases against members of Sharif family - Nawaz Sharif, Hassan, Hussain, Maryam and Captain (retd) Safdar.

ISLAMABAD - The accountability court on Friday adjourned hearing of the three corruption reference filed by the ...

The protest forced the accountability court judge to adjourn the hearing of the case without any proceedings.

The lawyers also argued with the deputy attorney general and created a commotion, forcing Judge Mohammad Bashir to leave for his chamber and abort today's proceedings.