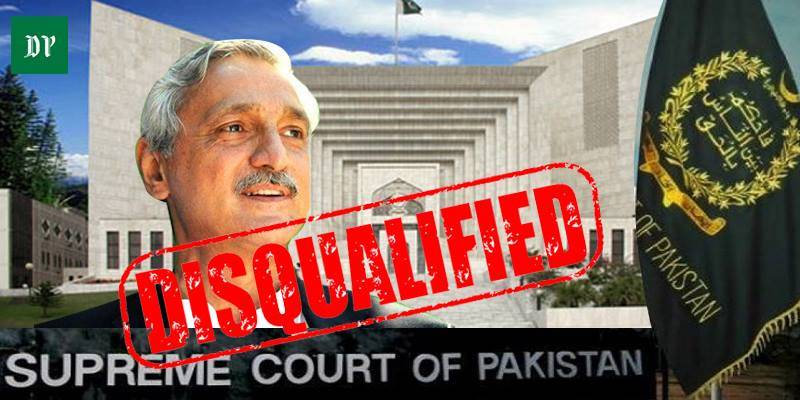 'Jahangir Tareen was not Sadiq' (honest) and 'Ameen' (righteous)' announced Chief justice Mian Saqib Nisar in a packed courtroom No. 1.

“Jehangir Tareen has been disqualified for not disclosing his off-shore company,” said the top court while explaining the legal grounds for the disqualification.

'Tareen deliberately gave the false statement before the SC for concealment the ownership of his 12-acre UK house' observed the three-member bench.

According to the short verdict, Tareen was disqualified on the basis of article 62 (1) (f) of the constitution and Section 99 of Representation of People Act (ROPA) as he was found involved in insider trading scandal as well as for concealing his offshore firms.

The chief justice while reading the judgement said that Tareen had done insider trading under the names of his driver and cook.

It was also stated in the judgment that the court was not announcing its decision on Tareen's agriculture land matter.

In the petitions filed by Pakistan Muslim League Nawaz leader Haneef Abbasi in November last year, it was accused that the PTI leader concealed their assets and offshore companies, and received foreign funds.

Akram Sheikh and Azid Nafees were among the counsels of the petitioner, whereas Naeem Bukhari argued for Imran. Sikandar Bashir Mohmand advocated for Tareen.

In the verdict announced by Justice Saqib Nisar, it was categorically observed that Imran Khan was qualified enough to be a lawmaker, to the pleasure of PTI members who had assembled inside courtroom No. 1.

Chief Justice Mian Saqib Nisar said that Khan was not liable to declare his offshore firm Niazi Services Ltd in his 2013 nomination papers as he was not a shareholder, adding that he submitted all the information asked of him.

“Imran Khan is neither director nor shareholder of the offshore company. He was not required to show his off-shore company accounts,” the court added.

It was also directed that the issue of foreign funding brought by the petitioner Haneef Abbasi should be handled by the Election Commission separately.

‘It is the responsibility of the ECP to look at the foreign funding case in detail’ Justice Nisar observed.