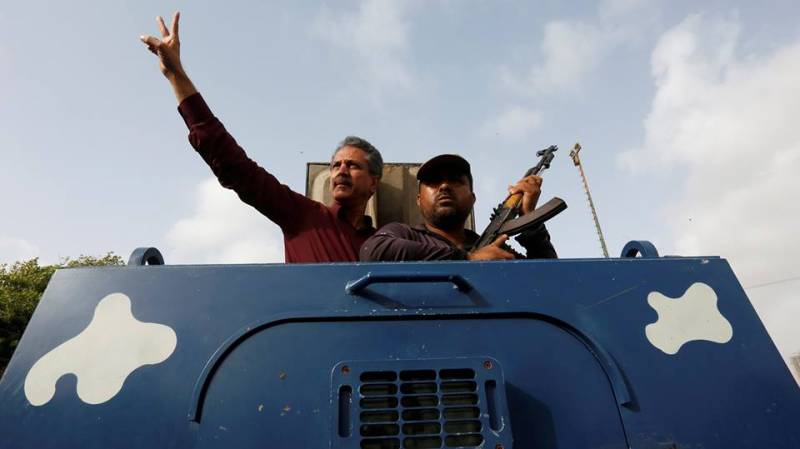 KARACHI - Wasim Akhtar, the leader of Muttahida Qaumi Movement-Pakistan and Karachi mayor was indicted by an anti-terrorism court in the May 12 violence case.

Akhtar appeared in court today and was indicted along with other suspects in the case that relates to the brutal violence that erupted in the port city, some 11 years ago.

There are multiple cases regarding the Karachi violence but the accused could not be indicted in all of them, owing to the absence of legal counsels.

However, the court indicted them in one case and summoned witnesses to record their statements at the next hearing on June 23.

Talking to the newsmen after the hearing, Akhtar said there should be impartial investigations into the real perpetrators of violence.

The politician who served as the home adviser at the time of violence called for an end to the fake cases.

"We are not the one to run away and will face the courts," said Akhter in a defiant tone.

He mentioned that after assuming charge as Mayor of Karachi, he was nominated in dozens of cases as part of a political vendetta.

The May 12 carnage was one of the deadliest incidents of violence in the megapolis.

Around 50 people were killed and hundreds were left injured as clashes broke out in the city between rival political groups.

The former top judge had remained confined to the lounge of the airport throughout the day; he returned to Islamabad without addressing a lawyers’ convention.

Akhtar was elected mayor of Karachi in August 2016 while he was in jail on judicial remand in various cases.

The top judge had sought the details of May 12th violence case last week and ordered to review it.

The top judge arrived at the Karachi registry of Supreme Court on Saturday where fateha (prayers) was offered for the victims of the violence, unleashed 11 years ago. Moreover, the chief justice also ordered for a Qurankhawani to be held for the departed souls.

Meanwhile, Barrister Faisal Siddiqi, appeared before the court where the top judge asked whether the case has been investigated or not.

To this, Siddiqi replied that the case was currently being heard at the Sindh High Court.

Please tell me the case number and we will review it, the Chief Justice remarked and sought the case file.

A petition languishing in the provincial high court was filed by Syed Muhammad Iqbal Kazmi who had withdrawn the case in the case of rising threats to his life.

The suo motu proceedings clubbed with a constitutional petition, filed by Kazmi, sought an inquiry into the violence that is one of the most violent episodes of the country’s history.