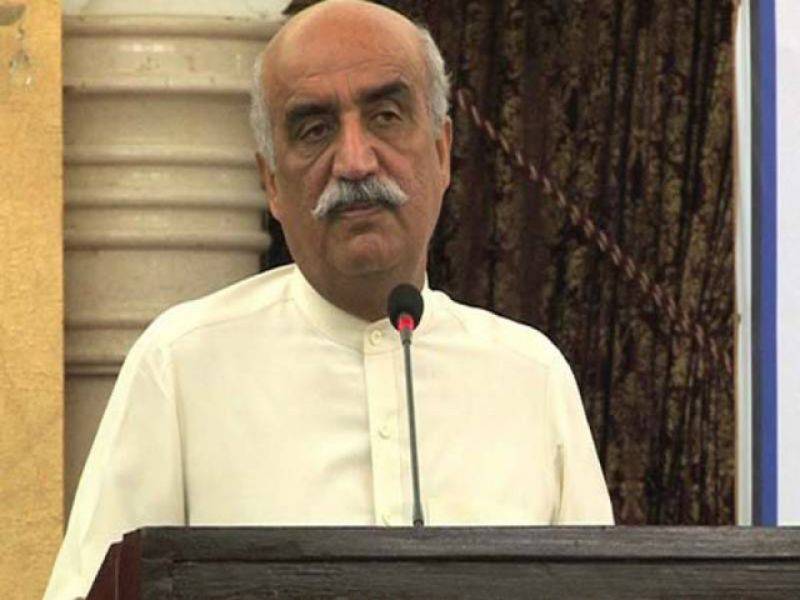 SUKKUR - The National Accountability Bureau (NAB) alleged the former leader of the opposition in the National Assembly, Khursheed Shah of hiding his money trail when asked about assets worth millions.

The Pakistan Peoples Party (PPP) leader was presented before an accountability court in Sukkur on Tuesday which extended his physical remand by six more days in a case relating to assets beyond means of income.

During today’s hearing, the National Accountability Bureau's lawyer informed the court that when the PPP leader was asked about the money trail of Rs300million, he [Shah] did not have any answer.

The NAB lawyer told the court that there was a transaction of Rs280milion but Shah did not provide any money trail, adding that the lawmaker owned a house worth Rs250million, along with properties worth millions in Sukkur and Karachi.

The NAB lawyer elaborated that the PPP leader must clarify his position regarding his properties, adding that NAB had unearthed three bank accounts belonging to Shah with savings up to Rs280million.

During the hearing, Shah told the court that if he were free, he would have provided NAB with all the evidence.

Upon this, the judge told the politician that he does not have the authority to grant him bail.

The PPP leader contended that he was an honourable politician and had paid Rs2.7million in taxes this year besides the taxes paid by his children.

The legislator told the court that he was facing heart ailments, claiming that his health deteriorated but he did not tell anyone about it.

“I have tears in my eyes today because of the baseless allegations against me,” Shah told the judge.

To this, the judge replied: Shah sahib, you made one mistake, you did not repeal the NAB law.

Shah’s lawyer told the court that despite orders, his client was not sent for a medical check-up.

However, this claim was contested by the NAB lawyer who said Shah’s check-ups were done on a daily basis by a doctor who had recommended that the PPP leader did not need a special hospital for treatment.

The bureau then requested a 15-day extension in the physical remand of PPP leader, however, the court only extended the remand for six days; Shah will be presented again before the court on October 21.