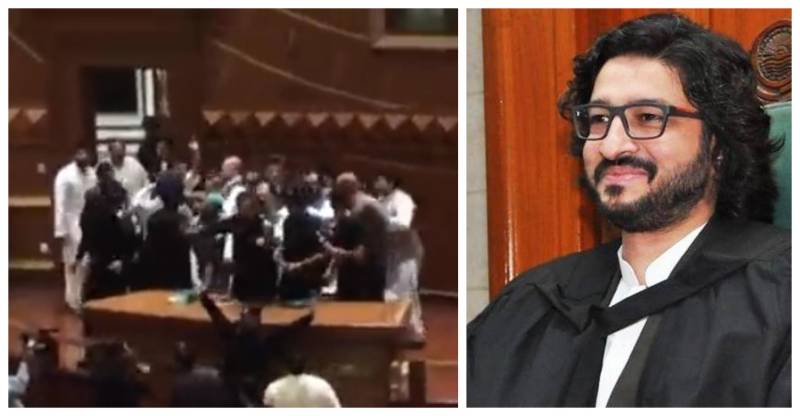 LAHORE – Punjab Assembly Deputy Speaker Dost Mohammad Mazari was manhandled by PTI and PML-Q lawmakers when he entered the hall to convene session for election of new chief minister.

Reports said that the government legislators surrounded the deputy speaker, who was slapped and dragged by his hair on the floor of the assembly.

Security officials rescued Mazari and shifted it to deputy speaker chamber. The official has reportedly sustained injuries during the incident.

As the situation turned violent, Punjab police officials in plain clothes entered the assembly to bring the situation under the control.

Lawmakers from PTI and its ally parties are creating ruckus in the provincial assembly in order to block the vote for the new chief minister as Usman Buzdar has resigned from the post.

Videos circulating on social media show PTI lawmakers, including women members, are tossing “lotay” in the air to slam defected members of the party.

PML-Q's Chaudhry Pervaiz Elahi and PML-N's Hamza Shahbaz Sharif, who has secured the support of PTI's dissident lawmakers — the Jahangir Khan Tarin and Aleem Khan groups — are to go head to head in the race to become the next chief minister.

Hamza Shehbaz claimed that he has support of 203 lawmakers while Pervaiz Elahi said that 189 legislators will vote for him.

To be elected as chief minister, a candidate will need at least 186 votes in the 371-member house. In the Punjab Assembly, the PTI has 183 lawmakers, PML-Q 10, PML-N 165, PPP seven, five are independent and one belongs to Rah-i-Haq.