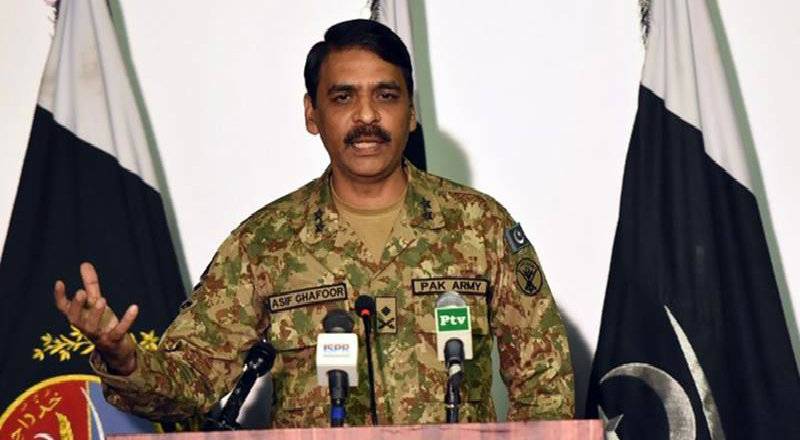 RAWALPINDI - Ehsanullah Ehsan, the mouthpiece of terrorist organisation Jamaatul Ahrar, has handed himself to security forces, the Pak-Army spokesperson revealed on Monday.

“Ehsanullah Ehsan is in our custody,” Maj Gen Asif Ghafoor, the Director General of Inter-Services Public Relations (ISPR), during a press briefing in Rawalpindi.

"There can be no bigger achievement for Pakistan than the fact that our biggest enemies are now turning themselves in," Gen Ghafoor said.

“When there is more information regarding him to share, we will do so,” the head of military’s media wing added.

The army spokesman also showed the recorded confessional statement of Naureen Leghari, a medical student from Hyderabad who allegedly fled home to join the militant Islamic State (IS) in Syria.

Leghari was arrested on Friday after her husband, whom she had married after leaving her home and joining the militants, was killed in an encounter in Punjab Housing Society.

“The girl went missing from Hyderabad. Later, a message appeared on Facebook in which she said that she had joined the military group," the director general said before he showed the video.

In the video, Leghari denied that she had been kidnapped, saying she made the decision to travel to Lahore on her own.

"Our main plan was to carry out terrorist activities," she said. "These included suicide attacks on the eve of Easter and kidnapping intelligence officials," she claimed.

Earlier, detailing the performance of the Pakistan Armed Forces in the ongoing nationwide Radd-ul-Fasaad military operation, Ghafoor said 15 major operations were conducted across the country. “The army performed two big operations in Punjab, one in Sindh, four in Balochistan and eight in Khyber-Pakhtunkhwa.”

Claiming that the security forces recovered over 4,083 weapons, the ISPR chief said over 500 absconders have surrendered since the launch of the military offensive.

“4,535 intelligence-based operations have been conducted while 723 joint check-posts were established in coordination with the police.”

As a result of the operations, 4,510 suspects were detained, including 1,859 unregistered Afghan nationals, Maj-Gen Ghafoor said, adding at least 108 terrorists were killed during exchanges of fire.