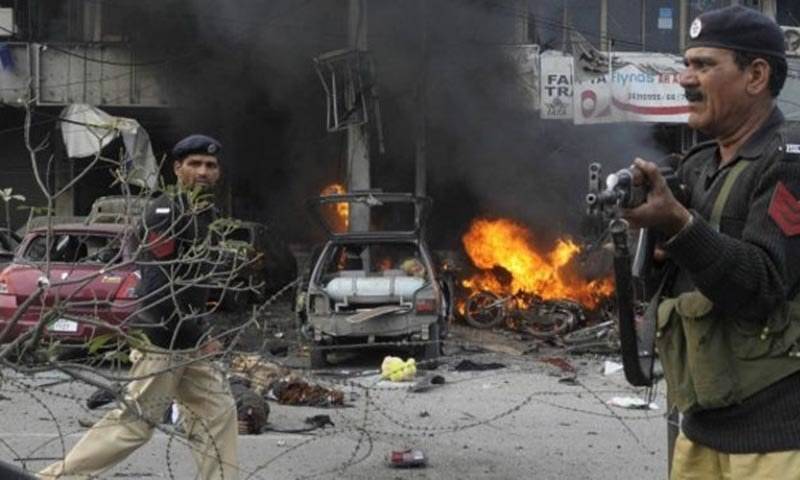 LAHORE (Web Desk) - As many as five people were killed and 25 wounded when a suicide bomber blew himself up outside Police Headquarters near Qilla Gujar Singh area of Lahore on Tuesday, police officials said.

The banned outfit Tehreek-e-Taliban claimed the responsibility for the attack.

A senior police official said it was a suicide attack and that the body parts of the bomber had been recovered.

Inspector General of Punjab Police Mushtaq Sukhera said the suicide attacker wanted to get into the Police Lines, but he failed to do so.

The explosion was so powerful that it shattered windowpanes of nearby buildings, and destroyed at least six vehicles parked outside the office of a travel agency.

After the blast, a heavy police contingent cordoned off the area. According to the Bomb Disposal Squad, some five to eight kilograms of explosives were used in the blast. Also the CCTV footage is being examined to get more details on the attacker(s).

Witnesses said huge plumes of smoke were visible in the air after the bombers struck.

Inspector General Punjab Police Mushtaq Sukhera told media representatives that the target of the attack was the Police Lines. He suspected that the bomber might have been searched on his way inside so he exploded himself prematurely.

Capital City Police Officer (CCPO) Amin Wain told media persons that the blast was most likely carried out by a suicide bomber.

Ever since operation Zarb-i-Azb began, the Army has been taking action against militants.

Today’s explosion comes nearly three months after a massive bombing near the Wagah border claimed over 60 lives in Lahore. The bombing at Wagah was followed by the terrorist attack on Peshawar’s Army Public School in December which claimed over 140 lives, with most of the victims being children and students.

The Dec 16 attack resulted in the formulation of a National Action Plan to counter terrorism which also saw a parliamentary consensus on the formation of military courts in the country as well as renewed resolve to counter religious extremism by cracking down on terror financing and regulating madrassahs. The government also rolled back the moratorium on capital punishment following which a number of convicted terrorists have been hanged in jails across the country.

Since the government set the NAP rolling, the country has seen a number of terrorist attacks — the major ones being attacks on imambargahs in Rawalpindi, Shikarpur and Peshawar.