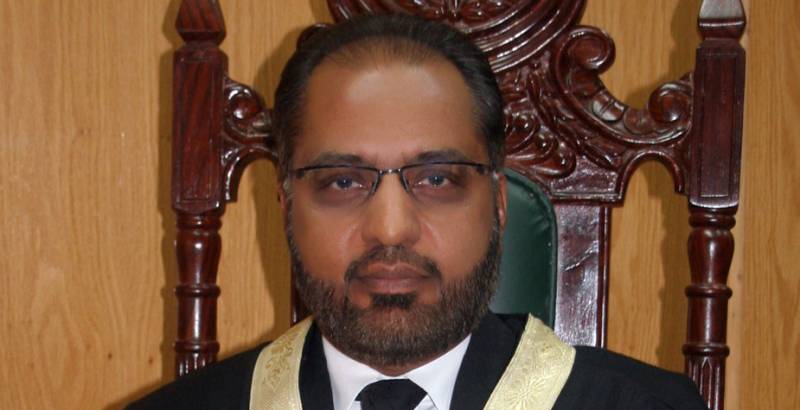 ISLAMABAD - Justice Shaukat Aziz Siddiqui of the Islamabad High Court expressed his displeasure over the alleged interference of secret agencies in the state affairs, saying they should focus on the country’s defense.

Hearing the case of missing persons, the high court judge appealed to Chief of Army Staff General Qamar Javed Bajwa for “barring his persons from intervention in the matters of other institutions,” adding that the army chief should take notice of the alarming situation, reported an Urdu website.

He claimed "Judges’ lives are in danger as their telephones are being tapped by the officials of the security agencies".

Addressing a representative of the Inter-Services Intelligence (ISI), who appeared in the court, Justice Siddiqui said: “Your personnel try to form a court bench of their own wish and the army chief should be aware of the misdeeds committed by them”.

"Enforced disappearance of citizens, businessmen, and other influential persons has become a routine in the capital city", he said in the written orders.

Saying the secret agencies should not cross the constitutional limits, the IHC judge ordered that interference in affairs of the judiciary, executives and other departments should be restrained.

A concept of state within the state should be eliminated, he said, besides warning that such situation would be disastrous for both army and state.

He ordered to send the copy of court ruling to the army chief, ISI director general, secretary defense and Secretary interior.

A recovered person Rab Nawaz, during the hearing, told the court that he was taken by unknown persons after being blindfolded.

Justice Siddiqui remarked that police officials are helpless in front of the security agencies. Expressing resentment over Islamabad’s SSP Investigation Zubair Sheikh, he said that a officer who has no courage to speak the truth should not be part of police.