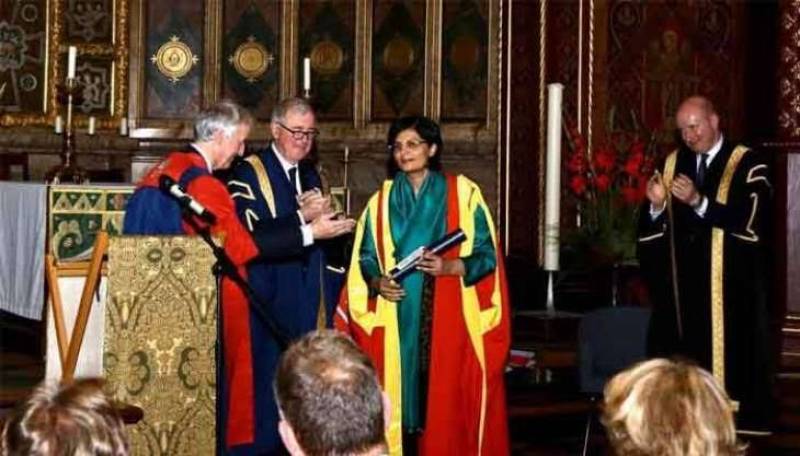 Dr Sania Nishtar is a King’s alumna, and already has a PhD from King’s College.

A statement of the High Commission issued here said, the ceremony took place at the historical University Chapel and was attended by a select gathering of academia, research scholars and administration of the college.

Dr Nishtar received her degree in person in London. Later, talking to media, she said, “she is deeply humbled”.

According to the Rt. Hon Lord Geidt, Chairman of Kings College, London “honorary degrees are conferred by King’s on persons of conspicuous merit and the highest distinction.

"Honorary Graduands have no formal duties as such, but may, of course, contribute to the life of the University by sharing experiences and expertise or engaging socially.”

Pakistan High Commissioner to the UK, Mohammad Nafees Zakaria has congratulated Dr Nishtar on the prestigious award and said the conferment of an honorary degree by a leading university of the UK was an acknowledgement of her contributions to public health, social protection and poverty alleviation.

He said, “The award is a matter of pride for all of us.” King’s College is one of the UK’s leading universities with an international reputation in the humanities, law, health and sciences.

It has a long tradition of excellence and a truly global perspective, dedicated to finding solutions to the world’s most pressing challenges and to developing its future leaders.