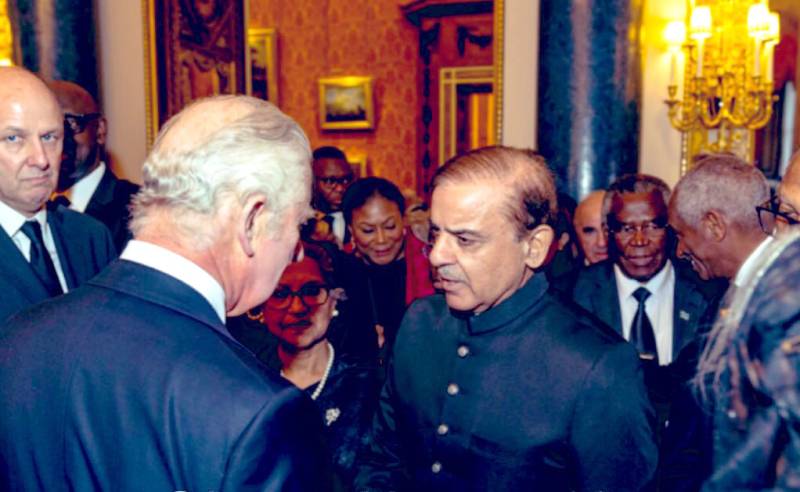 LONDON – Pakistani Prime Minister Shehbaz Sharif has shared condolences on behalf of the Pakistani people to King Charles III as he arrived in London to attend the state funeral of late Queen Elizabeth II.

The premier visited the UK as world leaders from more than 100 countries gathered in Britain for the last farewell to Britain's longest-reigning monarch, who passed away on September 8.

PM Shehbaz while extending condolences over the passing of Queen Elizabeth II, observed that the late monarch was a source of inspiration and strength for generations of Commonwealth citizens.

PM Shahbaz Sharif arrives at Buckingham Palace where King Charles III is hosting a reception for world leaders who have come to London for the funeral of late Queen Elizabeth II.@PakPMO @CMShehbaz @MaryamNSharif @pmln_org pic.twitter.com/pMHvUiWOxe

He recalled that Pakistani people had fond memories of the Queen’s two visits to the South Asian country, saying the bond of affection between the Royal family and the Pakistani nation had only strengthened with time.

PM conveyed best wishes to Prince Charles on his accession to the throne and expressed the hope that he would carry on the legacy of his mother in further strengthening friendship among Commonwealth nations.

Furthermore, he also expressed gratitude for the Royal family’s expression of sympathy and support in the wake of the devastating floods in Pakistan. The appeal for help and the response from both the British government and the public were deeply appreciated in Pakistan, the statement said.

Meanwhile, the United Kingdom is set to bid a final farewell to Queen Elizabeth in a grand state funeral at Westminster Abbey in central London. The Queen will be driven to Windsor Castle for burial in the royal vault.

Britain has declared Monday (today) a national holiday as a huge number of residents are expected to line the route of the procession. Reports suggest that the funeral will be screened to crowds in parks and public spaces across Britain.