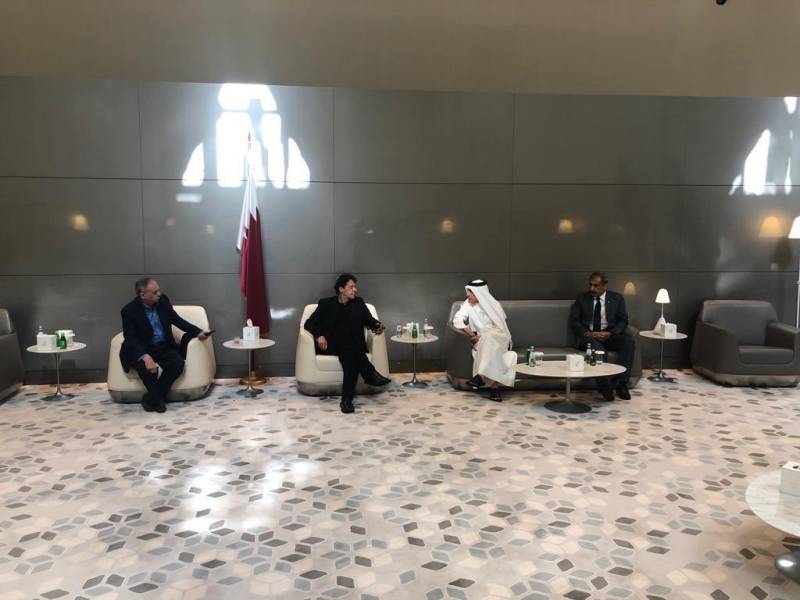 The premier met the Qatar Airways chief during his stopover at Qatar as the Pakistani leader had boarded a commercial flight for US instead of a charter plane.

After assuming office in August last year, it is the first state visit of Pakistan's Prime Minister to the US on the invitation of President Donald J. Trump.

Imran Khan will arrive in Washington on Saturday afternoon (local time) and stay at the ambassador’s residence in the city’s diplomatic enclave as part of the austerity measures.

Chief of the Army Staff Gen Qamar Javed Bajwa and the director-general of Inter-Services Intelligence (ISI) are accompanying the prime minister and well-placed sources say Pakistan's military chief would meet Defence Secretary Patrick M. Shanahan, the new chairman of Joint Chiefs of Staff Gen Mark Milley and other senior officials during his visit to Pentagon.

ISLAMABAD - Prime Minister Imran Khan is mulling over staying at the residence of Pakistan's ambassador to the United ...

Foreign Minister Shah Mehmood Qureshi detailed the crucial trip and said Prime Minister Imran will meet IMF chief David Lipton and his delegation on Sunday and will later have a similar meeting with the World Bank president; later in the evening, he will attend a community event at Washington’s Capital One Arena.

On Monday, the prime minister will arrive at the White House and after the book signing ceremony, will attend two sessions: a small group meeting at the Oval Office and an extended meeting in the cabinet room.

Prime Minister Imran will also have a one-on-one meeting with President Trump and on July 23, US Secretary of State Michael Pompeo will call on the prime minister.

Pakistan's prime minister will go to Capitol Hill for a meeting with the Foreign Relations Committee of the Senate and later address the bipartisan Pakistani American Caucus.

PM Khan will also meet Speaker of the House Nancy Pelosi before returning home on July 23.