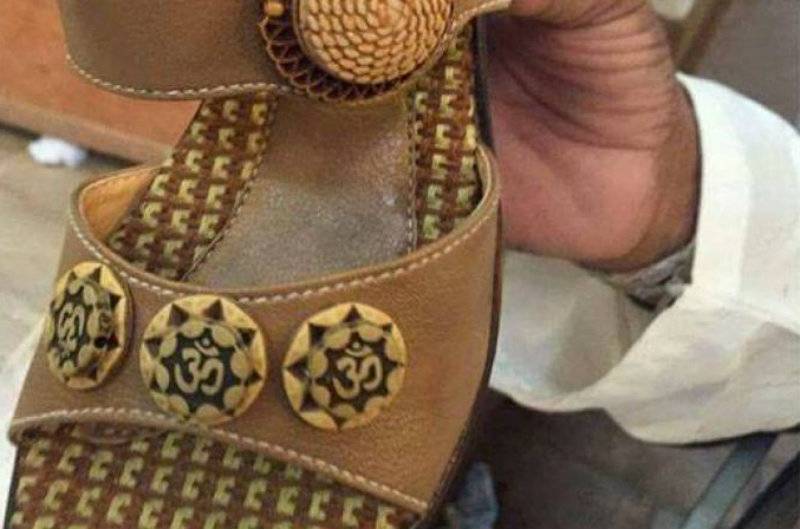 KARACHI (Web Desk) - Hindus in Pakistan are boiling over the alleged blasphemy after a shop in Tandu Adam Khan district of Sindh was found selling shoes with the name of Hindu lord ‘Om’ inscribed on them.

The community is now calling for a ban on such articles of shoes that have been causing “insult” to their religion.

Maryam Nawaz Sharif, daughter of PM Nawaz Sharif, has also taken notice of the alleged use of Hindu holy word “Om” on shoes being sold in Sindh.

“Unacceptable. Will report immediately,” she wrote on Twitter when her attention was drawn on the picture of the shoe allegedly manufactured by a Stylo Shoes.

However, the company refuted the claims and clarified that the shoe was a cheap knockoff and had not been designed, produced and distributed through Stylo Pvt Ltd.

Stylo Shoes Denied the Manufacturing of Such designs. They called it cheap and condemned. pic.twitter.com/tn0LvGBJyd

Pakistan has very strict blasphemy laws when it comes to Islam but minority religions often face trouble defending their traditions and beliefs.

The patron-in-chief of the Pakistan Hindu Council (PHC), Mr. Ramesh Kumar, said that they had already lodged protests with the Sindh government and local authorities in Tando Adam Khan after the alleged blasphemy was reported by some of the locals.

“It is most unfortunate that some shopkeepers in Tando Adam Khan are selling shoes on the occasion of Eid ul Azha with the Hindu sacred word inscribed on them and the purpose just appears to be to insult the sentiments of the Hindu community,” Kumar said.

“The pictures of the shoes have been circulated on the social media by concerned members of the Hindu community and we demand they be removed from the shops immediately,” he added.

Kumar further said that the sale of such shoes was an insult to the Hindus in Pakistan as it is blasphemous to use the sacred word ‘Om’ on shoes.

Pakistan Hindu Seva, a group working for religious harmony in the country, has urged the locals of Tando Adam to address this issue by remaining “within the jurisdiction of law to avoid any violence.”

“As ‘Om’ is the sacred religious symbol of Hinduism which talks about the oneness of God, let’s protect this oneness peacefully for the progressive and positive face of Pakistan. Let’s appeal the authorities concerned to take notice of the matter immediately to override any expected mistrust within the locals,” said another statement released by the Pakistan Hindu Seva.

Local Sindhi newspapers have also reported that similar shoes were also being sold in some other places of the province.