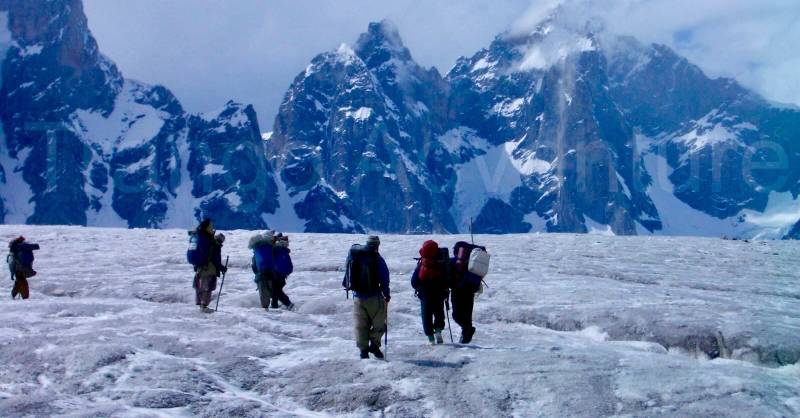 ISLAMABAD/BEIJING – A Chinese research team has, for the first time, extracted ice core samples from a glacier in the Karakorum Mountains in the Gilgit-Baltistan region.

This will help the study of the history of climate and environmental changes in the Qinghai-Tibet Plateau and surrounding areas.

The research team, composed of 10 members, was led by the Institute of Tibetan Plateau Research under the auspices of the Chinese Academy of Science. The team completed a 108-day scientific expedition in the Karakorum Mountains of the Gilgit-Baltistan region from October 2019 to January 2020, with the assistance of Pakistan’s Space and Upper Atmospheric Research Commission, Global Times reported on Wednesday.

While many glaciers around the world are retreating due to high temperatures caused by climate change, the glaciers in this mountainous region have been stable since the 1990s – with some even expanding – drawing attention from global scientists.

Using self-developed drill systems, the researchers obtained ice core samples with a total length of more than 110 meters at an altitude of 5,600 meters at the Biafo Glacier. They also extracted four cores from the beds of two nearby lakes, Sheo Sar and Saiful Malook.

sediment cores can help the study of glacier changes,” Xu Baiqing, head of the research team, told the local media.

These core samples will be sent to laboratories where scientists will use special techniques and equipment to analyze environmental indicators such as oxygen isotopes, black carbon, particles and heavy metals.

“Data will be used to study climate and environmental changes in the region on a millennial scale,” Xu said.

According to Xu, this mountainous region is also an important local water source. To know how the glaciers have changed over the past hundreds of years will help scientists predict the glaciers’ future and explore pathways for sustainable development in the region.

According to Xu, more drill operations in neighboring countries such as Tajikistan and Kyrgyzstan were planned for this year but they have been postponed due to the outbreak of COVID-19.