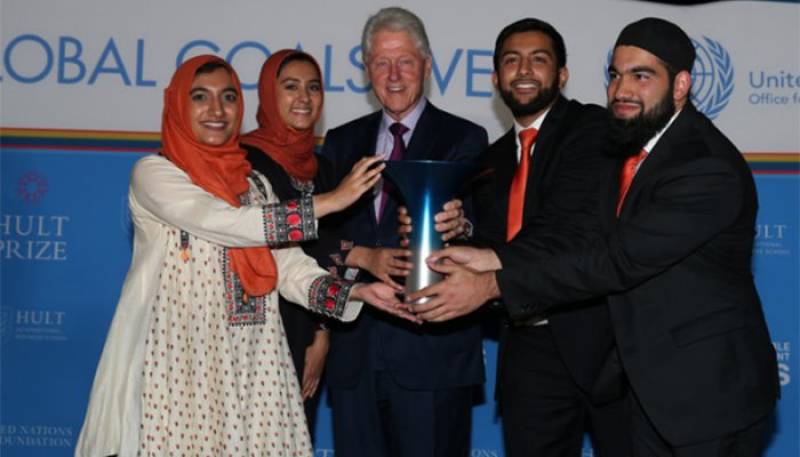 NEW YORK - Four Pakistani-American students won the top student competition Hult Prize in the US on Saturday for their social start-up, ‘Roshni Rides’, envisioning a transport network for refugees.

The students teamed up earlier this year to launch a solar-powered rickshaw transport system named Roshni Rides to connect refugees with critical spots of employment, hospitals, schools and markets places.

The idea sounded strange, however, the team made around $30,000 in a crowd funding campaign in May and then in the summer ran a pilot project in Karachi’s Orangi Town.

For the international Hult Prize competition which is dubbed as the Nobel Prize for students, Roshni Rides was pitched against five other groups from across the world after shortlisting but it won the coveted $1 million in seed money from the Hult Foundation.

“This is a private solution to a public problem that will have a big impact,” he said.

Dean of Rutgers Business School, Lei Lei described the team’s win as a great accomplishment and a reflection of the 'Rutgers' values.

"We are thrilled by their performance, and we will continue to cheer them on as they build Roshni Rides into a global venture," she said.

The Roshni Rides team member Farooqi feared being a Muslim and living in Trump's America, however, participating in the Hult Prize challenge offered her a platform to represent the team on a global stage following which she said “America is diverse”.

The tech-savvy students also documented their progress on Facebook ever since they launched their project.

All four team members plan to relocate to Pakistan, where the team will spend the first two months piloting the business in the far-off Orangi Town area of Karachi where an estimated 2.4 million people live.

Interestingly, the idea was inspired by Barkat Ali, a former resident of Orangi and family member of one of the team members.