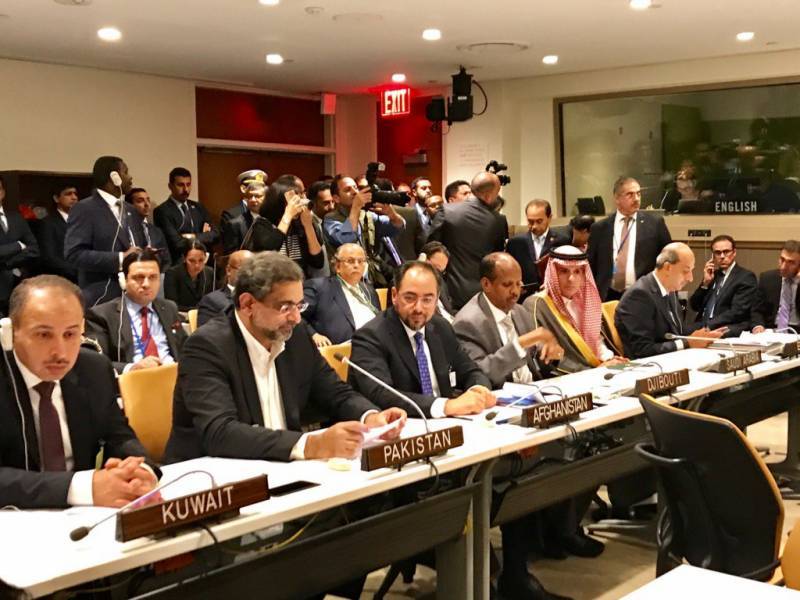 NEW YORK - Pakistan has urged the Organisation of Islamic Cooperation (OIC) to step up for the safety of Rohingya Muslims, who are becoming victims of ethnic cleansing backed by the Myanmar government.

Prime Minister Shahid Khaqan Abbasi stated this while addressing a OIC Contact Group meeting. He also expressed resolve that Pakistan was ready to join any efforts made by the OIC or the United Nations to prevent genocide of Rohingya Muslims.

He also termed the recent incidents in Rakhine state as a "text-book" case of ethnic cleansing, Radio Pakistan reported.

Calling for an end to "systematic and endemic discrimination" against the Rohingyas, the premier said over 400,000 have been forced to crossed over to Bangladesh to escape the persecution.

He also called o the international community for putting pressure on the government of Myanmar to bar it from the killings of Rohingyas.

He also demanded the UN to send a fact finding mission to the country and eliminate the hurdles in way of humanitarian supplies to the victims.

The recent episode of violence erupted in August after the army accused Rohingya militants of attacking police posts. Following the military crackdown, which has been termed “ethnic cleansing” by the UN, nearly 400,000 Muslims have crossed into Bangladesh for shelter.