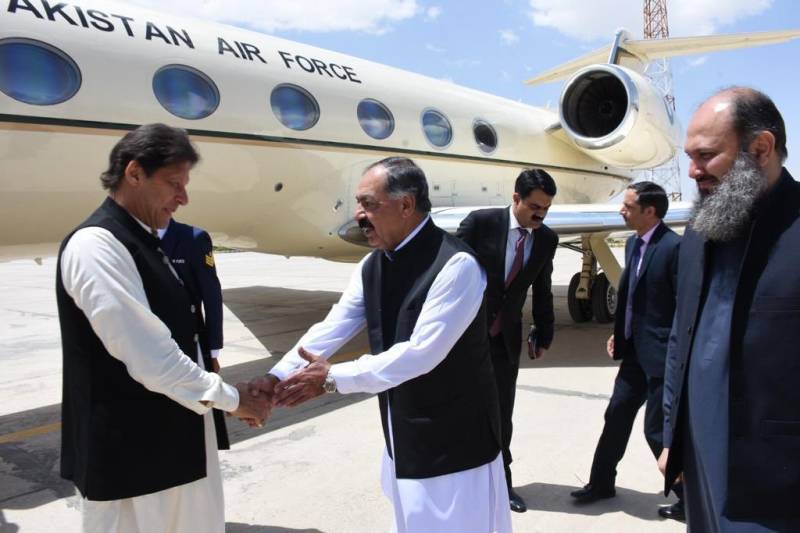 QUETTA – Prime Minister Imran Khan met a delegation of the Hazara community at the Balochistan University of Information Technology, Engineering, and Management Sciences (BUITEMS) university as he arrived in the provincial capital on Sunday.

According to PTI's official account, a prayer was "offered for the martyrs of the recent blast. Prime Minister listened to the issues of Hazara brethren and assured state will ensure their protection".

Khan’s visit comes more than a week after 20 people lost their lives and 48 others received injuries in a blast believed to be targeting members of the Hazara community in Quetta's Hazarganji market.

The attack on April 12 claimed the lives of nine Hazara and one Frontier Corps (FC) soldier. The 10 others who lost their lives included shopkeepers, businessmen and citizens working or residing in the area.

Prime Minister @ImranKhanPTI stands with people of Hazara community and gives a loud message to hostile elements that their efforts of creating chaos and anarchy will not be tolerated, it will all go in vain and strict action will be taken; Pakistan Zindabad 🇵🇰#Quetta pic.twitter.com/Msjp94M1SZ

Balochistan Chief Minister Jam Kamal Alyani thanked the premier for his visit to the province. The participants of the ceremony observed a minute of silence for the victims of last week's blast.

Hazaras are disproportionately targeted by sectarian violence as they are easily identifiable due to their distinctive physical appearance.

A report released by the National Commission for Human Rights (NCHR) last year stated that 509 members of Hazara community were killed and 627 injured in various incidents of terrorism in Quetta from January 2012 to Dec 2017.

QUETTA – Members of Hazara community protesting against Hazarganji blast have called off their sit-in in Quetta after ...

After meeting the members of Hazara community, PM Imran laid the foundation stone of Naya Pakistan Housing Scheme in Quetta, where he expressed his government's commitment to uplift Balochistan to make it at par with developed parts of the country.

“The country will develop when the weak segments of the society are cared for by the state,” the premier said in his address at the ceremony.

QUETTA – Prime Minister Imran Khan has expressed his government's commitment to uplift Balochistan to make it at par ...

Emphasizing the importance of a Master Plan for Quetta city, Imran Khan said the basic civic services can be ensured only when the cities are planned and organized. He said need of the hour is the construction of high rise buildings to save green patches.

The PM, while addressing the Baloch youth, said they are the future of our country.

The Naya Pakistan Housing Scheme project, under which foundation stone of 110,000 housing units has been laid down today, will be supervised by Balochistan Chief Minister.

A draft bill of Naya Pakistan Housing Authority has been created and will be presented before the parliament for approval.